Through Canon Australia’s lens, social media is a smart way to interact with photography lovers who are both current and prospective customers.

The camera brand aims for its social media campaigns on Facebook and Instagram to fall into one of three buckets: inspire, enable and celebrate photography, Tim Wilford, editorial and consumer engagement specialist at Canon Australia, told Internet Retailer at the Socialbaker’s Engage Prague conference in May. Canon has stores and sells online to both professional and amateur photographers.

While inspire, enable—which refers to educational content about the brand’s products—and celebrate are the three content areas for its campaigns, Canon’s key ingredient is user-generated content. The brand routinely runs competitions, solicits submissions and then features consumers’ photographs in its social media posts. The large majority of its posts are photos featuring a consumer’s photograph. “We want to acknowledge and showcase the amazing things that consumers are doing with our product,” Wilford said. “We’ve generated good results in engagement and audience growth, and I would say a big part of the reason is our user-generated content.”

On Instagram, Canon Australia has 309,000 followers, and its posts routinely receive thousands of likes and 30-100 comments. Consumers tag Canon in more than 1,000 photos a day on social media, Wilford said, and the brand tries to interact with as many posts as possible, such as liking, commenting or asking a question, such as what gear the consumer used in the photo.

Each week, Canon runs a contributor challenge in which it selects a few winning photos to feature on its social media account. Each week, about 250 consumers submit a photo, Wilford said. Canon has run this campaign each week for more than a year, and it’s one of its best performing in terms of how many consumers it reaches and how many engagements, or likes and comments, the post receives, he said.

While Canon offers occasional giveaways or prizes via Facebook, the brand tends to avoid these promotions, he said. The “prize” of being featured by Canon seems to be more than enough to generate engagement on social media, he said. 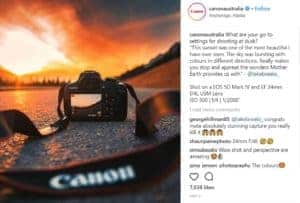 “One of the ways we’re measuring our ROI on our social media efforts and consumer engagement efforts is email sign-ups,” Wilford said.

Canon considers an email conversion if a consumer signs up for any of its email lists, including its In Focus newsletter. Still, email conversion takes a while, and so many of Canon’s campaign focus on reaching consumers and getting them to engage with the post, and with time, the consumer might sign up for Canon’s emails. “Everything we do doesn’t come down to email sign-ups,” Wilford said.

Canon has hundreds of thousands of emails in its database and that number has steadily increased throughout the years, Wilford said. Social media has helped generate these positive results, Wilford said. He also points to its In Focus newsletter that has had an increase in open rates. This means consumers are finding the content useful and relevant, he said, and that consumers find value in giving up their email address.

Canon uses social media marketing vendor Socialbakers as an analytics tool to guide its social media posts.  For example, Canon posts around 8 p.m. each day, as the Socialbakers platform found that was the time when the brand generates the most engagement, Wilford said.

The platform also allows Canon to easily identify top-performing themes in posts by rating it on a letter-grade scale of A+ through D. For example, Canon recently analyzed a year of its Instagram photos and found that weather-related content and black-and-white photos had the most consumer interaction, but hyper-saturated colored photos did not perform well. Canon can then apply that information to its future posts or to which photos it selects to feature, he said. “While it’s not something we follow to the death, it’s a good way to get content cues,” Wilford said.

Wilford joined Canon three years ago when the brand decided to bring its social media team in house instead of using an outside agency. The small team allows Canon to test and quickly try new and different campaigns, he said.

“For me and our team, our key goal is not to lose sight of what our audience wants,” Wilford said. “Especially in social media, it’s easy to get distracted by shiny new things. While at the end of the day, it’s still all about the audience—as long as you’re using new technology to serve the audience.”

What it takes to offer help via social media