Amazon.com Inc.’s and Marriott International Inc.’s mobile sites both improved on the AppDynamics/Mobile Strategies 360 Index for the week ending April 10.

“This week’s 3G data shows that Amazon moved up five spots mostly through content optimization that improved its speed score by 0.8 seconds,” Kacandes says. The speed score is a composite of multiple performance metrics that determines the mobile site’s rank on the index of 30 mobile sites.

On 4G, Amazon moved up three spots to No. 8 from No. 11 the previous week. Amazon has one of the fastest start render times on the 4G index, at 2.1 seconds, however, it’s visually complete time at 10.7 seconds is above the 4G index average of 9.8 seconds. Amazon did not respond to a request for comment.

On the 3G index, Marriott jumped up six spots to No. 18 from No. 24 the previous week. Marriott reduced its mobile site home page weight by almost 400 kilobytes and eliminated 30 elements, such as images or links, on its home page, Kacandes says. Marriott’s visually complete time improved by 2.3 seconds and start render time improved by 1.0 seconds.

On 4G, Marriott also jumped up six spots to No. 20 from No. 26 the previous week. Marriott did not respond to a request for comment. 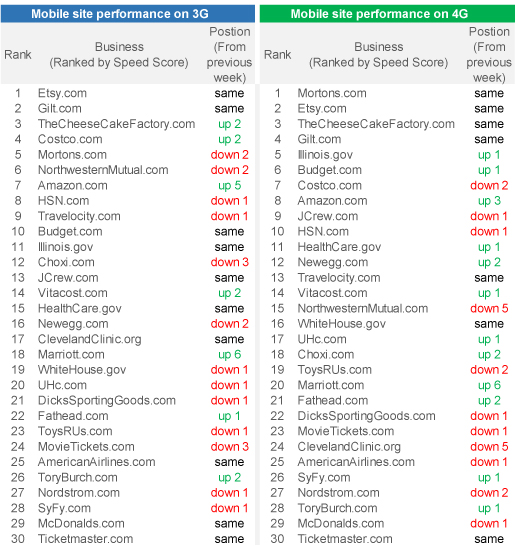 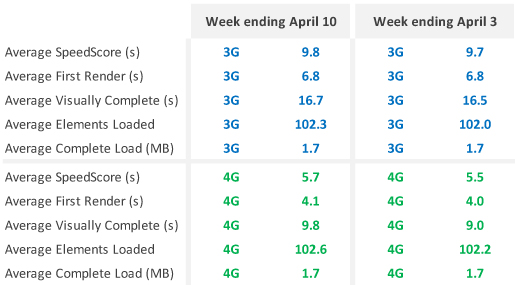 The index is accompanied by a chart on MobileStrategies360.com that is refreshed weekly to illustrate how each mobile site performs as well as index averages. Click here to access the performance chart for the week ending April 10.