Peak holiday week trends to look out for this year

A look at the shifts in online traffic from recent holiday seasons, and some less-obvious marketing opportunities ahead of Christmas. The holidays are here, and retailers are ready to optimize moment-to-moment. Let’s break down every data point from last Black Friday and Cyber Monday—down to the hour—and other emerging growth trends marketers don’t want to miss, including a special Amazon analysis.

To start, let’s take a look at total traffic to the Hitwise Retail 500 over the last few holiday seasons, and what that might mean for 2017. Retailers received 11.7 billion visits during the 2016 peak period, a 2% increase from the previous season. 2016 holiday growth was noticeably slower in comparison to the major traffic surge seen between 2014 and 2015, which showed a 25% year-on-year jump.

However, the 2016 slowdown may not be a reflection of all retailers—it was likely skewed by Amazon, who saw a huge traffic increase year-on-year in the 2015 peak season, followed by relatively flat year-on-year growth in 2016. Considering Amazon pulled nearly a third of traffic to the Hitwise Retail 500 in December, this likely affected overall industry growth. So far in 2017, we see early signs of traffic growth leading up to the holidays, suggesting it will be the biggest year on record. The top three shopping days of 2016 were Black Friday, then Thanksgiving Day, followed by Cyber Monday. Interestingly, these three days have competed for first place over the years. In 2015, Thanksgiving unseated Cyber Monday as the top visitation day, then last holiday season Black Friday nabbed the top spot.

As seen below, Mondays pulled a lot of traffic in 2016, although retailers may find this effect less pronounced in 2017. In previous seasons, Mondays saw huge traffic spikes followed by an immediate dip, but this drop-off has become less distinct every year. More sustained traffic enables marketers to engage online shoppers all week before they head into stores on the weekend. The day after Christmas also remains a big traffic day, so be prepared to serve shoppers seeking post-holiday deals.

A final note on the calendar: there will be four Saturdays in December 2017, which will distribute shopping across more days than last year. December 23rd, Super Saturday, will be an incredibly important shopping day, particularly for last-minute gift cards. Thanksgiving Day: As soon as family dinner ends, consumers are ready to shop. Visits between 8PM and 11PM on Thanksgiving were over 50% greater than the hourly average last year. In comparison to Black Friday, Thanksgiving visitors are more likely to plan their shopping rather than to purchase—but promoting heavily on this day is still important for capturing awareness and mindshare. Shoppers will be researching and deciding where, when and what they’re going to buy over the rest of the season.

Black Friday: Black Friday pulled the most traffic last year, and will likely retain the top spot this year. Last season, top retail sites were busiest between 11AM and noon on Black Friday, when visits were 52% higher than average. This is quite different from both Thanksgiving and Cyber Monday, which saw their busiest periods in the evening. Your biggest Black Friday promotions should be tailored to daytime shoppers.

Cyber Monday: In terms of hourly distribution, Cyber Monday didn’t look too different from your typical weekday, although visits were considerably higher. A slightly greater than average share of shopping occurred between 6AM and 8AM, but otherwise online shopping peaked during the evening hours, especially after 8PM. 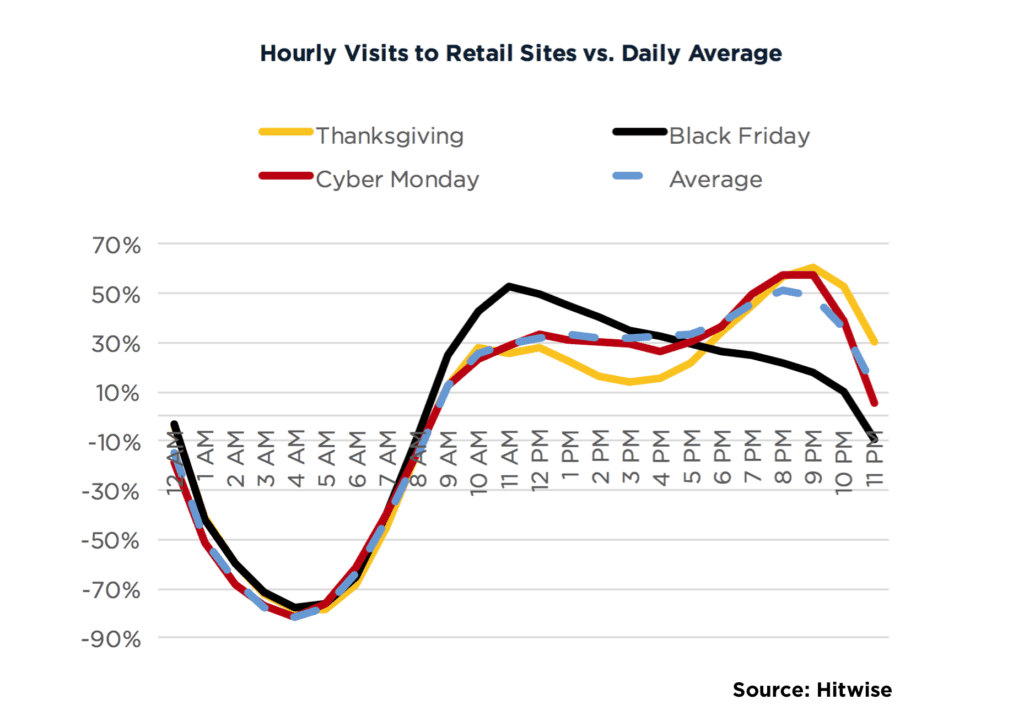 Thanksgiving Day: Late evening shopping during Thanksgiving is common across the retail industry, and Amazon is no exception. They received a full quarter (25%) of their Thanksgiving Day visits from 8PM onward in 2016.

Black Friday: Amazon received a little over 23% of their daily visits between 11AM and 4PM on Black Friday, but traffic also held steadier than most retailers until about 8pm. Retailers may choose to extend their product promotions on Amazon a little later than other Black Friday promotions this year. In 2016, retailers slowly increased their email campaigns in mid-November, and then fully ramped up during the week of Black Friday. During peak week…

This represents nearly double the email clicks (to top retail sites) than earlier in the same month. Emails drove the most traffic to retail sites on Black Friday and Cyber Monday, but the day following Christmas was also key. What are some unique angles can retailers integrate in their upcoming promotions? Here are a couple popular themes to consider integrating into your last-minute holiday campaigns:

Originally coined by eBay, Green Monday has gained wider traction. Search interest in 2016 was 70% greater than in 2015, and 2.3X greater than 2014. Granted, “Green Monday” searches were only about half that of “Small Business Saturday” last year, but Small Business Saturday has been on the decline for the last couple years. If you use Green Monday to drive sales, you may might want to include an explanation of the holiday.

This U.K. charity-based holiday has slowly gained traction in the U.S. In 2015, ugly sweater searches peaked the final weekend before Christmas, indicating that many Americans didn’t know it was an actual holiday. In 2016, however, searches peaked right around the official holiday, suggesting it’s catching on. Considering the holiday’s non-profit roots, retailers may want to partner with a charity for a fun and cause-based holiday campaign.

As the holidays draw closer, its important to keep a close eye on the ways history repeats itself, and the ways it diverges. It’s important that retailers incorporate learnings from 2016 and ground their strategy in as much data they can; beyond that, the key is to remain adaptable to the shifting needs of holiday shoppers during what will (hopefully) be the biggest year yet.

Methodology: Visitation, email clickstream and search data pulled with Hitwise Intelligence during the months of November and December in 2014, 2015 and 2016. Peak hourly analysis provided by a Hitwise Custom Analysis.

NRF projects nonstore holiday sales to increase up to 15%

Shoppers time spent in apps adds up on Black Friday