This will be the online jeweler’s third physical location, as it furthers plans to expand offline.

Blue Nile can’t really get by anymore with being called a “web-only” retailer, as the merchant announced plans this week to open its third physical store this summer. The store, which Blue Nile is calling a “web room,” will be located at the Tysons Corner Center mall in Fairfax County, Va.—its first physical location outside of the New York metropolitan area.

Blue Nile, ranked No. 85 in the Internet Retailer Top 500 Guide, opened its first location in June 2015, at Roosevelt Field Mall in Garden City, N.Y., and recently announced a second location at the Westchester Mall in White Plains, N.Y., to open by early summer. Blue Nile CEO Harvey Kanter announced last month that the retailer will open up to four new web rooms this year.

The merchant says its version of physical stores are an effective use of company resources, as they are “highly efficient, low overhead, and small footprint locations.” They give consumers the chance to view products in person, while offering the same selection and prices as its e-commerce site, Blue Nile says. All transactions continue to occur online via in-store tablets. 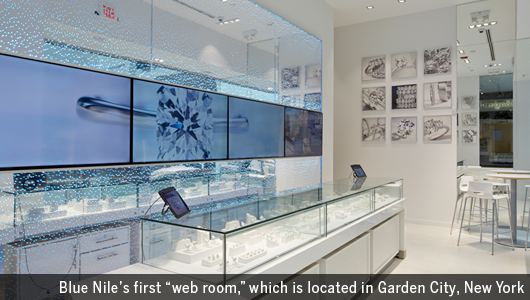 In December Kanter told Internet Retailer that the conversion rate of shoppers who visit the web room compared to those who buy directly through Blue Nile’s website without going to the web room was “compelling,” though he wouldn’t specify how much higher that conversion rate was.

“With its tech-savvy, early adopter residents, the Washington, D.C., area is a strong market for Blue Nile and an ideal location for our third web room,” says Blue Nile chief merchandising officer Julie Yoakum. “The web room is on the other end of the spectrum from traditional jewelry stores, in terms of both physical look and shopping experience. We’re going to shock some people—in a good way.”

The announcement of a third physical location comes on the heels of a disappointing fourth quarter for Blue Nile. The merchant, which had been banking on a late holiday rush of shopping for engagement rings, reported fourth quarter sales were down 5% year over year. For the full year, Blue Nile increased sales 1.4% to $480.1 million, compared with $473.5 million in 2014.

Blue Nile is one among a growing number of merchants that originally sold solely on the web, but are now expanding offline and opening stores. Among those e-retailers are menswear brand Bonobos (ranked No. 270), beauty products e-retailer Birchbox Inc. (No. 254) and eyeglasses maker Warby Parker (No. 247).