Chinese e-commerce giant Alibaba Group Holding Ltd. is investing in a big way outside of China to build its base of business and retail customers.

In 2015, Alibaba spent about $18.3 billion to invest in 65 companies, including acquiring eight companies and investing in 15 overseas businesses, according to China-based market data company IT Orange.

Alibaba’s major investment sectors are e-commerce, entertainment, finance, enterprise solution & technology, and online to offline, according to IT Orange. In China, O2O or online to offline, refers to a way for Internet companies to develop mobile apps that connect local services, such as business contractors, with online business users like construction companies.

Alibaba continued to invest in the technology vendor sector, but total spending in this sector was still small, IT Orange says. Alibaba also reduced investments in healthcare and travel companies in 2015, compared with 2014.

Take YTO as an example. YTO says its shipping network covers 2,300 Chinese cities and about 43% rural villages. The company says the partnership with Alibaba helps it improve efficiency and expand into rural areas and global markets. The company says it delivered 3.3 billion parcels in 2015, compared with 2.1 billion in 2014. 70% parcels delivered by YTO were generated by e-commerce orders and about 70% of those e-commerce parcels came via Alibaba Group businesses.

In 2015, YTO reduced delivery time by investing more in air transportation. The company purchased three Boeing B737-300 airplanes to further reduce some cross-province delivery times from three days to one day. YTO also worked with many regional shipping companies to build an international network that covers eight countries, including Japan, Korea and Germany.

YTO says Alibaba’s support also includes data and information. Alibaba sends feedback from online shoppers to YTO so the shipper can find and fix the problem faster than before. 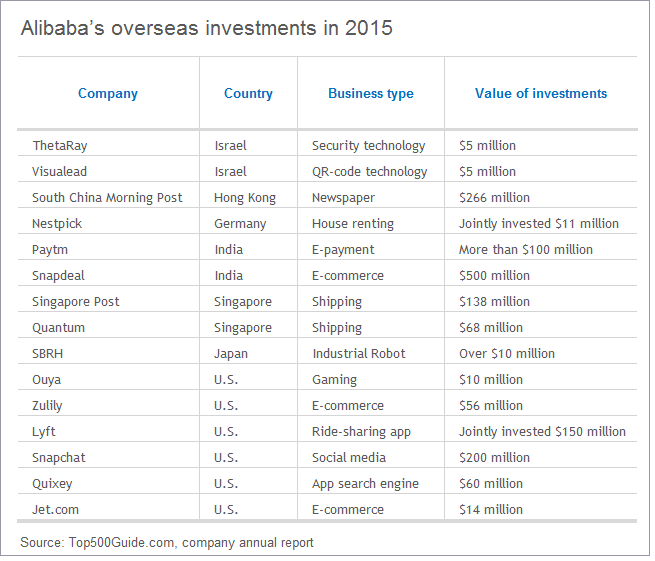 Alibaba also invested in 15 businesses located outside of mainland China in 2015. Alibaba’s overseas investments mainly focus on e-commerce, entertainment and technology. IT Orange estimates Alibaba spent about $2.5 billion for stakes in foreign companies. Alibaba declined to confirm the information from IT Orange but says the company may have invested in more than 65 companies in 2015 because it also invested in many small startups.

“Alibaba is just trying to get insight into the next big thing with the goal of eventually importing the tech back home where they have the world’s largest Internet audience. They’re investing in U.S. companies because this is where tech innovation is happening,” Laura Swanson, senior consultant at omnichannel consulting firm FitForCommerce, says. “Essentially they’re giving themselves a front-row seat to watch these companies so that by the time certain products or services reach China, Alibaba will have the control.”

Sign up for a free subscription to B2BecNews, a weekly newsletter that covers technology and business trends in the growing B2B e-commerce industry. B2BecNews is published by Vertical Web Media LLC, which also publishes the monthly business magazine Internet Retailer. Follow Frank Tong on Twitter @FrankTongIR.