A merry mobile holiday season ahead

Two new studies show consumers increasingly own and use mobile devices—in some cases in lieu of other electronic devices—and that means retailers need to be armed and ready with a mobile plan for the all-important holiday sales season.

Among the reasons shoppers plan to use their smartphones include: 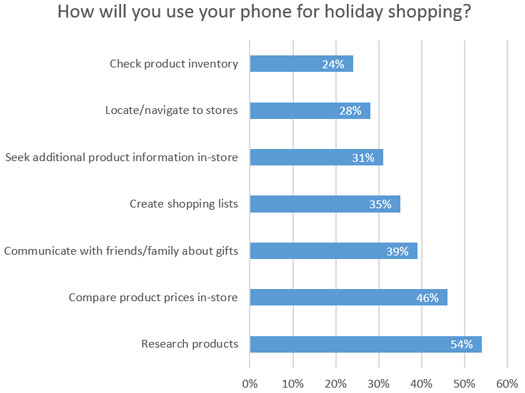 Additionally, 49% of mobile shoppers will rely on mobile apps and mobile web sites during the holidays to provide coupons. 46% will use mobile to look up customer reviews. 37% will consult mobile for their loyalty accounts and 35% will use mobile devices to locate a store.

“Mobile shoppers rely on their phones in general and their favorite retailer’s app in particular to help them bust through hectic stores to find exactly what they are looking for, and often to avoid stores completely,” says Bill Siwicki, vice president of mobile strategy and research at GPShopper. “Retailers need to ensure their apps and sites provide all the tools mobile shoppers need to shop during the holidays, or risk losing shoppers to competitors with better mobile offerings.”

Another new study from Pew Research Center suggests U.S. consumers’ mobile devices are in some cases replacing other electronic devices.

The trends of falling use of some devices is particularly notable for younger adults.  78% of adults under the age of 30 own a laptop or desktop computer, compared with 88% in that age group that owned one in 2010. Similarly, among those ages 18 to 29, three-quarters owned an MP3 player in 2010, but that has fallen to 51% today.

“We don’t ask people why they do not use a particular device, but this data suggests how the rise of smartphones has been a major story in the universe of connected gadgetry,” says Lee Rainie, director of Internet, science and technology research at Pew Research Center. “These changes in device ownership are all taking place in a world where smartphones are transforming into all-purpose devices that perform many of the same functions of specialized technology, such as music players, e-book readers or even gaming devices.”

Sign up for a free subscription to Mobile Strategies 360, a newsletter reporting on how businesses in all industries use mobile technologies to communicate with and market and sell to their consumers. Mobile Strategies 360 is published by Vertical Web Media LLC, which also publishes Internet Retailer, a business publication on e-retailing.