An analysis of online reviews shows that the pleasing smell of the anti-dandruff shampoo is key to its success.

Choosing a shampoo brand is a deeply personal choice. Models and movie stars are trotted out to showcase a $2.81 bottle of shampoo with ingredients that seem to belong in the championship round of a spelling bee rather than at the follicles of your hair. Branding aside, the Internet provides a way to examine which shampoo lines consumer really love.

To do this I assembled a list of 10 popular shampoo brands (Aveeno, Dove, Garnier Fructis, Head & Shoulders, Herbal Essences, Neutrogena, Pantene, Pert, Selsun Blue, and Suave). I then ran this list through our RightBid Feedback Collector software and collected ratings, reviews, and other data on these brands from Amazon. (Pert was removed from the final study as it represented less than 0.3% of all reviews collected).

All in all, we examined 934 products and collected 25,121 reviews with an average rating of 4.28 on a five point scale. The results are shown in the table below: 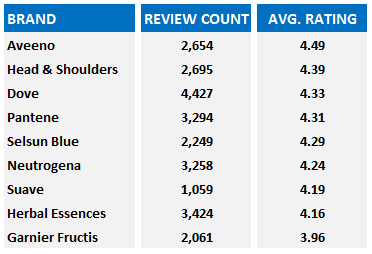 As is shown above, Head & Shoulders does surprising well, considering the simplistic image the Procter & Gamble brand conveys. (Aveeno for example, has actress Jennifer Aniston pitching it; Head & Shoulders is promoted by professional football player Troy Polamalu). My shampoo of choice, Garnier Fructis, finished last, and was the only brand with an average rating under 4.0.

Examining the text reviews on Head & Shoulders painted a more nuanced picture of the brand’s success. The words terrible and awful appears more frequently in Head & Shoulders reviews than for most other brands, but so did the word great. Perhaps the key is that the word expensive showed up in just 2.4% of all reviews, the least of any of the brands examined

However, the most telling explanation seems to center around Head & Shoulders’ smell. The word smell showed up in 31% of all reviews for Head & Shoulders—third among all brands. And the average rating in those reviews using the word smell was 4.39, the highest of all nine brands.

Head & Shoulders does indeed seem to be head and shoulders above its competitors. Furthermore, the brand seems to be on an upward swing: Its average rating for the first quarter of 2015 was 4.46, much higher than its 4.34 overall rating before this period. These numbers are so compelling, I may replace a bottle of Garnier Fructis with a bottle of Head & Shoulders the next time I’m in the supermarket!