Consumers who shop at Amazon are impulse buyers interested in self-image, and that’s particularly true of the younger ones. Those who don’t shop on Amazon exhibit quite different characteristics.

It might seem like everyone shops online, but in fact, only 61% of all online adults make regular online purchases (about 87% percent of US adults are online.) However, if you shop online, you probably shop on Amazon; they attract 86% of online shoppers, according to Resonate, which surveys some 200,000 consumers each year. Amazon sells a lot of books, but their 2014 earnings statement indicates that their consumers spend billions of dollars more on technology, clothes, toys, and other things that they could easily get at a competitor website or at any local big-box store. Amazon clearly knows how to motivate many people, and it’s interesting to peel back the layers of consumer data to figure out how.

Having such a huge population of current shoppers creates a puzzle for Amazon’s executives. They need to maximize their return on product and marketing in a near-saturated market. Hence innovations like the Amazon partner program, Amazon Prime, Amazon One Hour Delivery, “locker” pickup and one-click purchasing. To figure out what innovations will make the biggest impact on future revenue, they actually need to look at three different audiences: non-Amazon shoppers that might start shopping at Amazon, non-online shoppers who might be convinced to start shopping online and Amazon shoppers who might be persuaded to shop more (the biggest and most important group.)

The Mystery of the Non-Amazon Shopper

Amazon or Not, Shoppers Have their Reasons

Compared to non-Amazon shoppers, those who do use Amazon are much more likely to represent the overall Internet population (mostly because it’s a much larger group of people.) They are though, more likely to make impulse purchases and are motivated to make brand decisions that help their self-esteem and self-image. Millenial Amazon shoppers are even more motivated by self-image and are further motivated to purchase things if they are fun, exciting and rewarding.

Amazon started a shopper reward program in 2005 that eventually became Amazon Prime. The main attraction of the program is guaranteed 2-day shipping, but there are other benefits such as access to streaming videos and music. After a free trial, Amazon Prime recently increased the cost from $79 to $99 per year. Recent surveys by RBC indicate that about 37% of Amazon customers are Prime members and that they spend 2.3 times more each year than other Amazon shoppers. As with most loyalty programs, for the retailer it’s not so much about offering ways for consumers to save money, but about enticing them to spend more overall with more relevant offers.

People who like loyalty programs tend to be young moms, between 25 and 44 with a few kids and a slightly higher than average income—in other words, a very attractive demographic. Loyalty programs like Prime are for convenience and reliability. If you order something online and you really need it, it’s nice to know that for a little extra money, you’ll get it. If you’re a mom, it’s even nicer if you can buy it with a single click of a button—literally.

Additionally, people who like loyalty programs act like free advertising for Amazon, a nice side effect of an already lucrative program. They’re motivated by what’s popular, they share on social media 50% more than average, and talk about products and services 24% more than average. What’s more, they’re highly likely to sign up for other company programs and download their apps, creating a stickiness that’s every retailers dream. 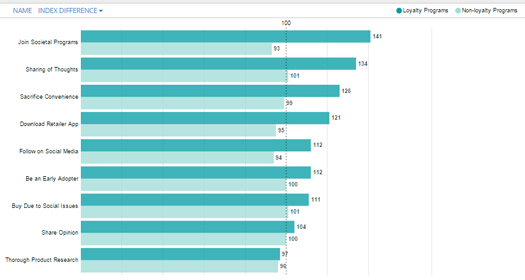 While loyalty is a tried-and-true program that has afforded retailers great success for years, some programs are a little less obvious like “buy-online, pickup in store.” The idea that people would rather drive to get a product in a nearby store than let it arrive at their doorstep seems counterintuitive. Yet recently, everyone from Target, Wal-Mart and Sears to Gap, Nordstrom and Macy’s have offered it. Amazon has a less obvious “locker” program to compete with the idea.

It turns out that retailers are on to something. The group of people who shop online and pick up in-store represent about 20% of the online adult population. Even more than with loyalty programs, in-store pickup is relevant for the most desirable group—higher-income women with families who are motivated to get what they want. They’re even more likely to engage in other retail programs, recommend products and download the company app.  They are 40% more likely to have two or more children in the house and 47% more likely to make more than $150k.

Most importantly, the in-store pickup program speaks to the “why” behind this desirable groups’ purchase behavior. These are people who want what they want, when they want it and if that means driving to pick it up, then that’s what they’ll do. People who want to pick up in-store are 48% percent more likely than average online adults to be motivated by luxurious offerings and 48% more likely to want innovative products.

Successful Retail Programs Include the Who, What and Why

Amazon is getting more things right than it’s getting wrong. What’s clear from the data is that Amazon is not just targeting a demographic group, or selling a particular product.  They are innovating based on underlying motivations and purchase drivers more effectively than competing brick-and-mortar retailers, which makes them more relevant more often. But those competitors aren’t standing still. The innovation of picking up products bought online in-store represents a move by Amazon’s rivals to make up some lost ground, and it looks like they’ve found a winner.