Not a Digital Commerce 360 member? Join for free
Share This Story:
Research & Analysis

The largest online apparel retailers in the world think globally and acquire often.

There are 576 apparel and accessories e-retailers ranked in Internet Retailer’s family of research guides—far more than any other merchandise category—and they collectively generated $126.59 billion in sales in 2012. In an indication of the power of top retailers in this category, the top 10 apparel and accessories e-retailers globally generated $21.46 billion—or a full 17.0%—of those sales, an analysis of Top500Guide.com data show. As a whole, the group grew online sales 23.5% from $17.37 billion in 2011.

Half of the top 10 apparel and accessories e-retailers are European, four are based in the United States and one hails from China. 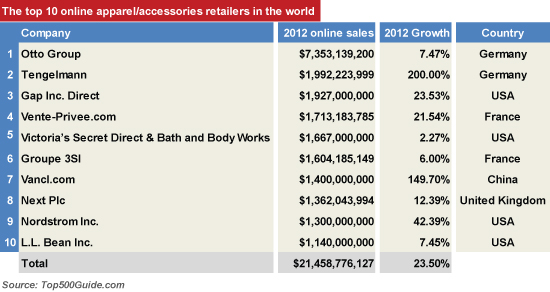 What these e-retailers have in common is they all embrace selling to consumers beyond their borders, and most have pursued growth via acquisitions in recent years.

Otto Group, which alone commands 5.8% of the global online apparel/accessories market, for example, operates more than 100 e-retail sites across eight European countries, and has operations in dozens more through other holdings, including its Witt Group, Bonprix Group, Sportscheck and Heine divisions. Late in 2012 it acquired the assets of Neckermann Gruppe, which was once one of the biggest mail order and online retailers in Germany.

More significantly, this fall Otto Group announced plans to take over the e-retail holdings of France’s Groupe 3SI, which is No. 6 in the list above. Last week, the companies announced that Groupe 3SI, renamed as 3SI Holding SAS, will operate as a wholly owned unit of Otto, effective Jan. 1, 2014. (The few pieces of 3SI Otto did not acquire will do business as ArgoSyn SA.) Neither company has said what the terms of the takeover are, but it means notable apparel/accessories sites such as 3 Suisses, 3 Pagen, Becquet, Blanchporte, Helline, LeChouchou and others will now be part of Otto’s powerhouse portfolio, and further entrench Otto as the world’s leading e-retailer of apparel and accessories.

The largest U.S. entry in the Top 10 list is Gap Direct Inc., which now sells and ships to consumers in 46 countries. Last year it bought specialty women’s apparel retailer Intermix Holdco Inc. for $130 million. France’s Vente-Privee, meanwhile operates its flash-sale sites in seven European countries and in 2011 expanded sales to the United States through a partnership with American Express. U.K. e-retailer Next Plc ships to consumers in 61 countries, and U.S. entrants Nordstrom and L.L. Bean ship to consumers in 41 and 44 countries, respectively. In other words, thinking globally is a key strategy for the top 10 e-retailers of apparel and accessories.

The members of the Top 10 list may look significantly different next year, however. Otto’s absorption of Group 3SI creates an opening for at least one new e-retailer to join this list, and growth rates and merger activity among other large e-retailers of apparel and accessories further down the list may trigger some changes.

Many of the contenders to break into the top 10 hail from Asia, though making the list would require that they maintain their rather astounding growth rates. They are:

But astounding growth can be hard to maintain, especially in a fast-growing and volatile industry like e-commerce in China. The e-commerce site of 360Mart.com, a 5-year-old web-only e-retailer from China, is currently not available, and press reports say the company has ceased operating at least temporarily in the face of financial difficulties. 360Mart.com was the 11th largest apparel and accessories e-retailer in 2012, and the largest web-only e-retailer. It grew online sales 50% in 2012 to an estimated $964.3 million. If it had maintained a 50% growth during 2013, its sales would have topped $1.45 billion, and it likely would have moved into the top 10. But that now seems unlikely.

Should Japan’s Start Today maintain its 190% growth, it would generate an estimated $1.81 billion in 2013 sales, likely vaulting it ahead of Victoria’s Secret Direct and Bath & Body Works, and possibly landing it in the top five.  The company launched its Zozotown e-commerce site in Japan in 2004 and has built out a family of Zozo-branded sites in Japan and more recently China.

Another possibility for a future top 10 worldwide apparel ranking is Hudson’s Bay Co., a Canadian e-retailer that currently isn’t even in the top 40 globally. It ranks No. 158 in the 2013 Top 500 Guide, which includes only North American e-retailers, but this summer it acquired Saks Inc. in a deal worth $2.9 billion and with it the operations of Saks Direct. Saks Direct, with an estimated $899.0 million in 2012 e-retail sales is No. 13 among apparel and accessories e-retailers globally. Combined, Saks and Hudson’s Bay 2012 online sales total $1.04 billion, and both companies were growing online sales aggressively before the acquisition. Hudson’s Bay, which acquired retail chain Lord & Taylor in 2012, grew online sales 69.76% between 2011 and 2012 and Saks grew them 20.09%. Depending on when the combined companies begin recording sales together, it may become a top 10 contender.