What do Chinese online consumers want to buy from the U.S.? It’s not what you think

For observers of China’s economic rise, one of the most talked-about trends of the last few years has been the booming sales of foreign-made luxury goods to the country’s increasingly large and wealthy middle class. Here at Alibaba Group’s Hong Kong offices, located above an upscale mall in the pricey Causeway Bay shopping district, we witness this phenomenon first hand every day. Getting to work invariably means weaving through packs of mainland tourists laden with Gucci and Louis Vuitton shopping bags, most of them pulling wheeled suitcases stuffed with expensive, tax-free treasures purchased for themselves or friends back home.

The luxury-goods boom is only part of the China consumer story, however. According to a recent survey of online shoppers conducted by Tmall Global, Alibaba’s cross-border e-commerce solution that allows smaller Western merchants to sell online directly to Chinese consumers, some adventurous PRC (People’s Republic of China) shoppers are moving beyond their desire for status-flashing designer labels. They are turning to Western brands for more common items, buying imported goods that aren’t available or are too costly locally through international online shopping websites.

This is encouraging news for U.S. retailers and manufacturers looking to expand to China. The PRC purchased $109 billion in Made-in-U.S.A. products last year, making the country the third-largest importer of U.S. goods. Even better news: According to a report from the Boston Consulting Group, 61 percent of China’s consumers would pay more for a product made in the U.S.

So what do these budding free-spenders want from America besides Ralph Lauren shirts and Tiffany watches? Try baby formula. A well-publicized 2008 scandal involving tainted China-made milk powder and infant formula sent mainland mothers scurrying to the safety of overseas brands from places like Europe and New Zealand, a trend that continues to this day. A similar desire for trustworthy maternity and infant-care products are helping to drive cross-border sales on Tmall.com, a giant Chinese shopping web site that hosts the storefronts of Tmall Global merchants alongside those of major domestic and foreign brands.

Indeed, infant-care products make up a significant proportion of overall cross-border sales by Tmall Global merchants. On Tmall.com as a whole, infant care products barely register with buyers, who shop the domestic site mainly for apparel and consumer electronics. 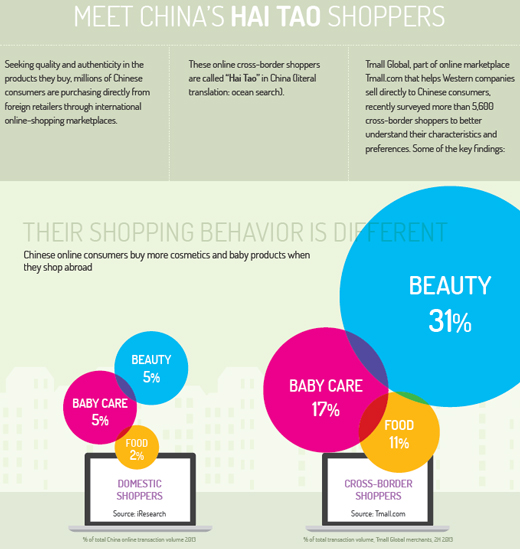 This contrast in cross-border purchasing patterns is so pronounced that Tmall Global staffers are calling infant care products the “gateway drug” that prompts Chinese consumers to first try buying directly from Western brands via the Internet.

Later—once they are convinced that products purchased cross-border are genuine, can be shipped to them without a long wait and offer good value—consumers branch out to other products. According to the Tmall Global survey, the types of merchandise entry-level consumers were most interested in buying from foreign companies are fashion apparel; baby and maternity products; consumer electronics; cosmetics and skin care products; and food and nutritional supplements. 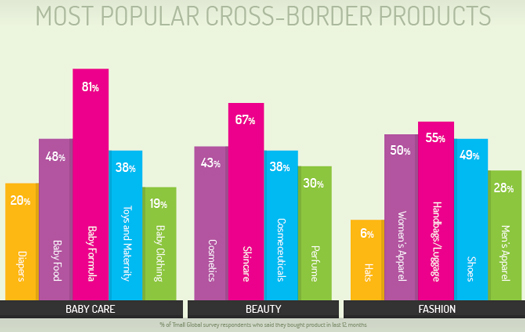 There’s a common denominator underlying the survey responses: Chinese cross-border shoppers are seeking quality and authenticity. Tmall.com is even having success delivering fresh and frozen food from around the world direct to Chinese doorsteps because consumers are curious about Western cuisine and want to treat their families and friends to high-quality specialty foods like New Zealand oysters and Alaskan salmon.

This desire for foreign goods purchased via the Internet is becoming so common in China it even has a name: it’s called hai tao, which roughly translated means “ocean search.” The Tmall Global user survey showed “hai tao” shoppers fall mainly into two groups. One group consists of young women buying clothing and cosmetics. Their online shopping behavior is driven by wants rather than needs. They are building their personal styles around brand-name Western goods that aren’t conveniently available or are too expensive in China. More than 40 percent of respondents to the Tmall Global survey said they bought fashion apparel from overseas retailers in the previous 12 months, while 38 percent said they bought cosmetics. 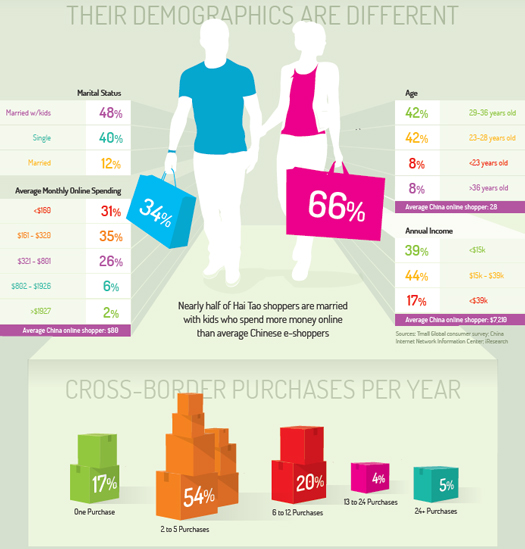 The second group is made up of married women with children, most of them members of two-income households with relatively high spending power. They often start exploring cross-border shopping while pregnant when they are looking for pre-natal vitamins and maternity goods they can trust.

Once the baby arrives, they shift to foreign-made baby formula, diapers and other childcare products. In time, the mothers begin to buy other goods for themselves and for their families as they become more accustomed to online shopping for imported brands that offer them peace of mind. More than 35 percent of Tmall Global survey respondents said they bought baby and maternity products from overseas in the previous 12 months; 23 percent said they bought health and nutrition items.

These young mothers are just the advance guard. With China’s ongoing urbanization, the number of wealthier Chinese households is expected to continue to increase. McKinsey forecasts that consumption by urban PRC households will nearly triple from RMB 10 trillion in 2012 to RMB 27 trillion in 2022. 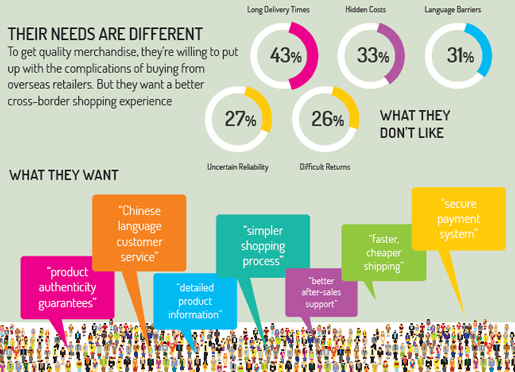 The good news: As Chinese tastes continue to evolve, Western retailers have a chance to grab a piece of this vast market if they can figure out how to meet the needs of an increasingly demanding and sophisticated audience. Companies that can establish consumer trust and create an image of quality and authenticity will have the upper hand. The bad news for Western retailers: Chinese brands are getting better and better, and are more conscious of the need to project a sense of quality and product safety. The key is to get moving on a China strategy now as consumers are starting to solidify brand choices, meaning that those who snooze may lose.

Alibaba Group operates the two largest online shopping portals in China, Taobao and Tmall, which together account for about 80% of China’s online retail sales.