Chico’s, No. 85 in the 2016 Internet Retailer Top 500 Guide, does not break out e-commerce in its quarterly earnings reports. Chief financial officer Todd Vogensen told analysts on the retailer’s second quarter earnings call that digital commerce is growing “at a healthy pace,” declining to specify a dollar figure or a percentage.

This latest round of layoffs is part of a companywide restructuring aimed at reducing costs and creating what Chico’s calls a more nimble environment where the company can be more “responsive to customers’ evolving needs.” The cuts come amid what CEO Shelley Broader described to analysts on a conference call this morning as a “difficult apparel retail sales environment.” A company spokesperson said the cuts were mostly headquarters jobs and that store associates were not affected.

Also, new positions were added in the quarter in key areas such as digital and business analytics. Some of those positions were filled in-house, and others are still waiting to be filled, the retailer says.

Chico’s expects the layoffs to result in $25 million in annual savings. They affect 13% of the corporate and field leadership headcount. This isn’t the first time this year Chico’s has made organizational changes to save money. In April, the retailer’s chief marketing officer and vice president of e-commerce Miki Racine Berardelli left the company amid a restructuring of the company’s e-commerce and marketing operations that was designed to save $14 million.

Chico’s does not break out e-commerce publicly on a quarterly or annual basis, but Internet Retailer estimates that its online sales have been growing at a modest clip for the last several years. Chico’s brought in an estimated $458.5 million in web sales last year, up 2.0% from $449.5 in 2014.

Chico’s isn’t the only apparel merchant whose online sales are growing, while sales offline and companywide decline. For the second quarter, youth apparel merchant Abercrombie & Fitch Co. (No. 58) just reported a 4.2% decline in total sales amid a 4.9% jump in e-commerce sales. Clothing brand Guess Inc. says e-commerce sales in the Americas grew 4.9%, while store sales fell 3.1%.

This is causing many in the sector to close stores. Apparel brand Perry Ellis International Inc. just last week announced plans to close 20% of its physical outlets, while reporting a 35.6% increase in e-commerce sales. Macy’s Inc. (No. 6) posted double digit gains in online sales in the second quarter amid a 3.9% decline in sales companywide. With sales sliding, Macy’s says it will close 100 stores within the next year, or 13.7% of its current store base, in an effort to cut costs.

Such moves by apparel retailers provide further evidence of the growing impact of the internet on the way consumers are shopping for fashion items. In 2015 alone, Internet Retailer calculates that total reportable online apparel sales grew by 19.7% to an estimated $77 billion. Even these numbers are understated because they exclude the online sales of apparel by mass merchants, such as Wal-Mart Stores Inc. and Target Corp., which do not break out their sales of clothing on the web. 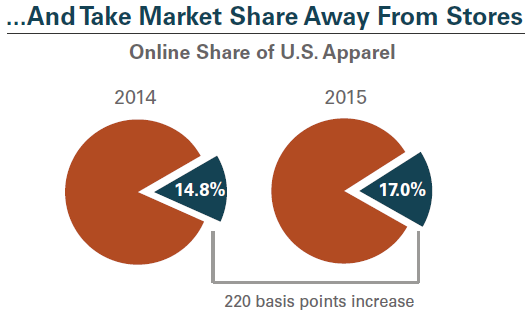 Even with that understatement, the web last year account for 17.0% of total apparel sales in the U.S., up from 14.8% the previous year—a remarkable one-year gain of 220 basis points in share of market for apparel e-retailers. It is the reason why store sales of apparel grew a meager 1% last year—less than one-third of the average growth of store retailing—and why so many apparel stores have been shuttered or are hanging on by a proverbial thread.

More in-depth analysis on the online fashion industry is available in Internet Retailer’s report entitled Behind the Online Apparel Boom.