Apparel retailers make up only 17% of the total sales transacted online last year with merchants ranked in the just-released Internet Retailer Global 1000. But it’s a category particularly ripe for innovation and growth online.

While lots of apparel is sold on Amazon.com and Alibaba Group Holding Ltd.-owned sites—investment firm The Cowen Group estimates Amazon.com Inc.’s global apparel sales at $16.3 billion last year—these two behemoths in no way have the market cornered with it comes to fashion.

On the contrary, experts and retailers say, the online apparel category is particularly wide open for many global players, large and small, to succeed. Consumer tastes vary widely when it comes to fashion, and many shoppers demand a personalized touch. The sheer size of Amazon and Alibaba make it hard for them to provide that kind of human feel.

As a result, plenty of retailers in this category are bringing in big sales online, and they are growing fast. In fact, the 271 merchants ranked in the new Global 1000 that primarily sell apparel and accessories represent by far the largest category in terms of the number of players. These merchants brought in a collective $105.3 billion in online sales last year, a 22.0% increase compared with $86.3 billion in 2014.

That accounts for more than 17% of the total sales in the Global 1000. 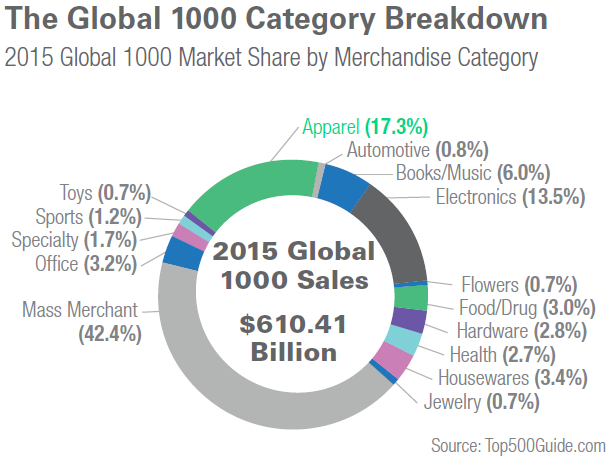 Part of the challenge of selling apparel online is that consumers can’t try on or feel items before making a purchase. Many Global 1000 merchants seek to overcome these barriers with exceptional customer service, convenient return policies or by appealing to the personal tastes of each consumer.

Take Zalando SE, a web-only fashion retailer based in Germany and the fourth largest online apparel merchant in the world. Zalando is No. 25 in the Global 1000. The company has built much of its success, it says, on an unusually flexible return policy. Roughly 50% of its purchases are returned—very high among apparel merchants—and the e-retailer is OK with that.

“We encourage customers to order as many products as they can and use their homes as a fitting room,” says Tomasz Ebbig, head of branding for Zalando’s U.K. operation. “We have quite a high percentage of returns, and for us that is absolutely fine.” The merchant is even testing what it calls free “same-day returns” in London and Berlin through a company named On the Dot. If a consumer receives her order and is unsatisfied in some way, she can go online to OnTheDot.com/Zalando to schedule a courier service to pick up her items. The courier will arrive within an hour, and the service is free to Zalando customers during the trial period.

Zoot AG, another web-only European apparel merchant, has a unique way to give consumers a chance to try on its clothing through what it calls Try & Buy. The merchant ships online apparel orders to a physical location where a consumer can try on items and keep only what fits. 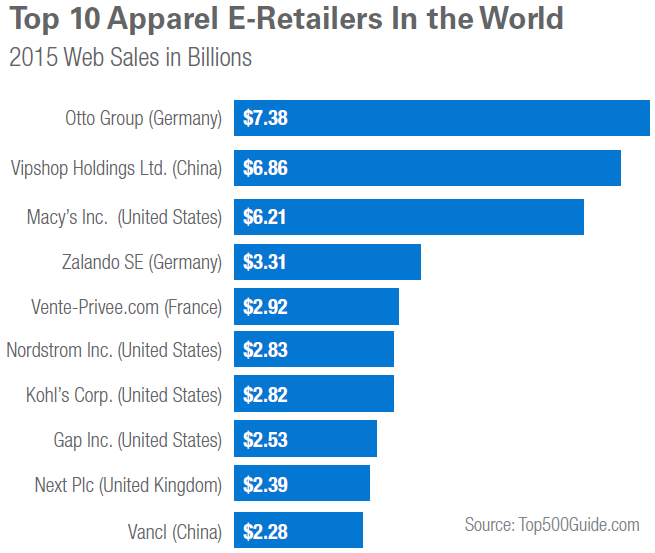 More information is available in the Global 1000 on other online apparel merchants, and the top players in all e-retail categories.