It was mostly all quiet on the holiday front in the rankings on 3G and 4G networks in the AppDynamics/Mobile Strategies 360 performance index for the week ending Jan. 3. Just as companies restrained from making changes to their mobile sites right before the holiday, it seems many did the same the week of the New Year’s Eve and New Year’s Day, perhaps more concerned with toasting to a prosperous new year than testing new mobile site strategies.

“Looking at this week’s data and comparing it to the previous week, we see that in the 3G data Fathead.com and NorthwesternMutual.com switched the Nos. 1 and 2 places last week to this week, while Travelocity, Gilt, American Airlines, Morton’s and Etsy remained the same in the No. 3 to No.7 spots,” says Peter Kacandes, senior product marketing manager, mobile, web and synthetics, for AppDynamics.

Similarly, Costco and HSN traded places in the No. 8 and 9 spots on 3G, and Amazon, Budget, Illinois.gov and Choxi remained the same in the 10-13 positions.

However there was one retailer who made some speed gains on 3G for the week ending Jan. 3, which resulted in it moving up more than just a spot in the rankings. DicksSportingGoods.com moved up two spots by shaving about 400 kilobytes off its home page weight. That reduced its visually complete time, or the time is takes for the web browser to complete drawing the visual elements of a home page, and boosted it in the 3G rankings of the performance of 30 mobile home pages from No. 25 to No. 23.

Dick’s did not respond to a request for comment on the changes it made to improve its mobile site. 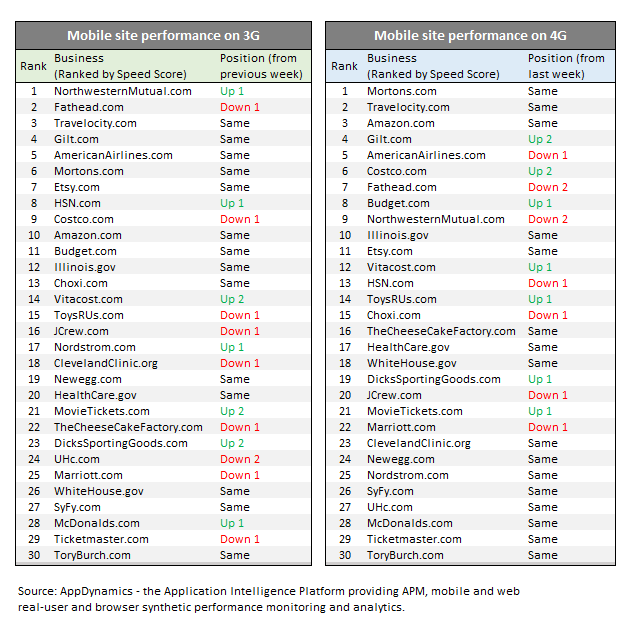 The index is accompanied by a chart on MobileStrategies360.com that is refreshed weekly to illustrate how each mobile site performs as well as index averages. Click here to access the performance chart for the week ending Jan.3.

Subscribe Today to Mobile Strategies 360 and Receive Exclusive Data. Not only will you get the latest information on the rapidly changing mobile industry, you will also receive Mobile Market Insights a free monthly overview on the market. These fact sheets are filled with data and statistics to help you identify opportunities and get a jump on the competition. Mobile Market Insights is available only to Mobile Strategies 360 subscribers. Once you enter your free subscription, click on the link for your free download.