The monthly index ranks the speediest mobile sites among the top 100 online retailers, and Vistaprint Ltd., No. 31 in the Internet Retailer 2016 Top 500 Guide, topped the list for the second month in a row, loading in 0.46 seconds on average for the first two weeks in September.

The top 10 retailers with the speediest mobile sites are: 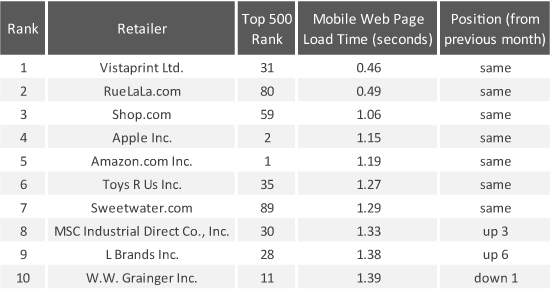 Further down the index, Express Inc. (No. 99 in the Top 500) was one of the biggest movers this month, jumping 32 spots to No. 37 from No. 69 in August. The apparel retailer reduced its mobile load time by 0.66 seconds to load in 2.32 seconds, according to Catchpoint Systems data. This load time is 0.45 seconds faster than the index average of 2.77 seconds.

Catchpoint Systems attributes the jump to Express reducing its page by 3.32-megabytes to 3.96 megabytes, down from the whopping 7.28 megabytes the previous month. The 3.96-megabyte size still makes Express one of the heaviest mobile site home pages on the index this month, as it is way above the index average of 1.87 megabytes. Catchpoint measures the load times and page weights of a site but is not able to determine what elements a retailer removed from its mobile site to boost speed. Express could not be reached for comment.

Mass merchant Target Corp. (No. 22 in the Top 500) went the opposite direction, slowing 0.73 seconds this month after it added 0.47 megabytes to its page weight. Target ranked No. 57 on the index, loading in 2.93 seconds with a page weight of 1.55 megabytes, compared with a ranking of No. 39 last month when it loaded in 2.20 seconds with a slimmer 1.08-megabyte mobile home page. Target did not respond to a request for comment

Internet Retailer and Catchpoint Systems produce two monthly performance indexes, one for mobile sites and one for desktop sites, ranking the 10 fastest retailers out of the top 100 retailers in the Internet Retailer 2016 Top 500 Guide.

Catchpoint Systems monitors each mobile website’s home page with measurements taken from Catchpoint Systems’ 3G and 4G backbone monitoring nodes across the U.S., at intervals of five minutes for two weeks each month. Backbone monitoring nodes are the locations of Catchpoint’s devices that are near data centers operated by the main Internet Service Providers that provide service to a city. The nodes simulate end-user contact with each website. Catchpoint monitors webpage load time, availability, hosts and items. They are defined as follows:

Availability: The percentage of time during the test week that the site can be successfully reached by a consumer.

Host: Any domain that delivers data, content or services over the Internet to the site.

Items: Also known as requests. Webpage components, such as files or images that a page loads from internal and external hosts or domains. These can include PDFs, PNGs, JPEGs and GIFs.

The top 10 retailers are ranked based on their mobile webpage load times on 3G and 4G networks.