Alibaba's revenue growth accelerates to 59% in its latest quarter

The value of goods sold on Alibaba’s marketplaces, often referred to as gross merchandise value (GMV), grew 24% to 837 billion yuan ($126 billion) during the first quarter of Alibaba’s 2017 fiscal year. That’s double the $61.7 billion global GMV of Amazon.com Inc. during its second quarter, according to an estimate by ChannelAdvisor Corp., which facilitates sales on web shopping portals. EBay Inc. reported second quarter GMV of $20.85 billion worldwide. However, Alibaba’s sites sell some services, such as travel, that are not sold by Amazon and eBay. 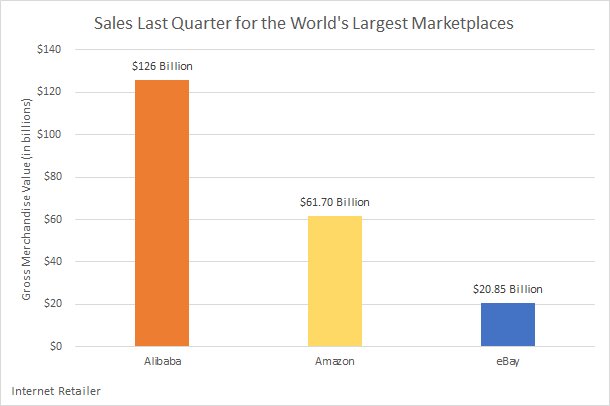 Alibaba officials have emphasized of late that the company serves consumers in many ways, beyond just operating online shopping malls, and gathers customer data from its entertainment, payment and other properties.

“Our results show the scale and leverage of our ecosystem,” CEO Daniel Zhang said in a statement Thursday. “The acceleration of our revenue growth reflects the deep value propositions that we bring to our customers. We are changing the way our 434 million active buyers engage with our platform, as we introduce social, community and personalization driven by smart data into our e-commerce marketplaces, realizing our vision of ‘[email protected]’.”

However, Alibaba’s main businesses remain operating China’s two dominant online marketplaces, the wide-open Taobao online bazaar where some 7 million merchants and individuals sell, and the Tmall marketplace for brands and retailers. Alibaba says there are 10 million sellers on its various global marketplaces, which also include the Alibaba.com wholesale site and AliExpress, where consumers all over the world can buy from mostly Chinese sellers.

Alibaba reported that 75% of China marketplaces revenue came from purchases made on mobile devices this quarter. Mobile monthly active users in June reached 427 million, an increase of 17 million from March 2016 and a 39% increase from 307 million in the year-ago quarter; mobile revenue rose 119% year over year to 17,514 million yuan ($2.635 million).

Alibaba’s Taobao mobile app has added features to increase engagement with shoppers, such as video streaming. During June, active users opened the Taobao app an average of seven times a day and users posted more than 20 million reviews and comments a day.

Alibaba, which is frequently accused by luxury brands of not doing enough to prevent merchants from selling fakes on its sites, says it has stepped up its efforts to fight counterfeiting. The company says it closed about 200,000 Taobao stores suspected of selling counterfeit goods in 2015, while consumer complaints about counterfeit products dropped 51.6%. On Wednesday, rival JD.com, No. 1 in the Internet Retailer 2016 China 500, said it discontinued 22,000 merchants in the first half of this year.

Alibaba reported its Tmall Supermarket online grocery business launched in 2012 grew 202% in the recent quarter. Tmall Supermarket’s major competitor is JD.com and its partner Wal-Mart, No. 8 in the China 500. To compete with Alibaba, these two companies announced an alliance in June, when Wal-Mart Stores Inc. acquired a 5% stake in JD.com Inc. and JD took control of Wal-Mart’s China e-commerce grocery site, YHD.com.

While Alibaba’s marketplaces account for more than half of online retail sales in China it is not ranked in the Top 500 because it does not own any merchandise, instead operating platforms on which other merchants sell. That’s proven to be a profitable business model, as Alibaba regularly rakes in big profits from advertising on its websites and commissions charged on Tmall sales. In the recent quarter, Alibaba reported net income of 7.142 billion yuan ($1.075 billion), up 50% from the year-ago period after taking out investment gains in the year-ago quarter. For comparison, eBay reported net income of $435 million in Q2 and Amazon a record quarterly profit of $857 million.

Alibaba is also competing with Amazon and other tech giants in cloud computing, providing computer capacity and data storage to 577,000 client companies through its Alibaba Cloud service. Revenue from this business unit grew 156% in Q2 over the prior-year quarter to 1.243 billion yuan ($187 million), but the unit produced a loss of 158 million yuan ($24 million.)