The bad news is online sales growth in the region is slowing because Brazilian retailers—whose sales account for 58.2% of total web sales in the just-released Internet Retailer 2016 Latin America 500—face macroeconomic challenges. The good news is Brazilian retailers are still finding ways to grow online, and the region as a whole benefits from small markets like Mexico and Argentina, where more consumers are shopping online than ever before.

Online sales in Latin America decelerated compared with 2014 due to the severe economic slump in Brazil, the largest e-commerce market in the region. Merchants ranked in the 2016 Latin America 500 grew web sales 15.5% in 2015 to $22.22 billion from $19.24 billion in 2014. This compares with 22.1% growth in 2014. The growing middle class and more consumers with access to the internet both help the emerging e-commerce market expand in Latin America. But Brazil’s economic crisis, high unemployment rates and high inflation are slowing the growth in online sales, e-retailers and experts say. The Brazilian economy shrank 3.8% in 2015—the biggest decline in gross domestic product since 1991, according to the Brazilian central bank.

Macroeconomic woes haven’t stopped consumers in the country from shopping online, however. While overall retail sales in the nation fell 4.0% in 2015, according to the Brazilian Institute of Geography and Statistics, e-commerce sales increased 15.3%, Brazilian internet consulting and research firm e-Bit estimates. And the 295 Brazilian merchants ranked in the Latin America 500 grew online sales 15.5% in 2015 to $12.94 billion from $11.20 billion.

How are companies growing amid economic challenges? One reason online retailers can grow during the economic slowdown is that many consumers are turning to the web for better prices and a wider assortment of products, says Leonardo Dib, chief financial officer of Brazil-based online retailer Grupo Netshoes.

“People are more willing to face a digital experience during moments of economic turmoil, as they need to make the best purchase,” Dib says. “The online environment becomes even more important in comparing prices and providing easier access to offers.” Grupo Netshoes, No. 7 in the Latin America 500, grew 33.0% in 2015 to $788.9 million, up from $593.2 million in 2014.

“We are also exploring other revenue streams,” says Dib, responding to the crisis in the Brazilian economy. New tactics include launching a credit card, called NCARD, in May to consumers and offering fulfillment services to other retailers.

Other Brazilian retailers are adding product categories, getting ahead in mobile and eliminating free shipping to combat the headwinds of the economy.

While Brazil’s economic problems have hampered e-commerce growth, Mexico, the region’s second-largest economy, is projected to increase online sales 106.9% to $6.0 billion by 2018 from $2.9 billion in 2015, according to Forrester Research. Online retailing grows as more consumers in Mexico are accessing the internet through smartphones each year. In Q2 2015, smartphone users increased 41.4% year over year, according to the Competitive Intelligence Unit. The 52 Mexican merchants in the Latin America 500 grew 23.3% to $1.930 billion 2015 from $1.565 billion in 2014.

Mexico’s potential led e-commerce behemoth Amazon.com Inc., No. 5 in the Latin America 500, to launch full retail and marketplace operations in the country in June 2015 with Amazon.com.mx. The company launched with the largest variety of categories and products of any Amazon international launch, says Juan Carlos Garcia, head of Amazon Mexico’s marketplace. In addition to its more than 32 million products, Amazon Mexico offers marketplace sellers fulfillment services in which Amazon delivers on their behalf. Garcia says Amazon is able to address the concerns many Mexican consumers have about online shopping.

The Internet Retailer 2016 Latin America 500 is available as a database and a separate Executive Report in PDF format. The content includes: 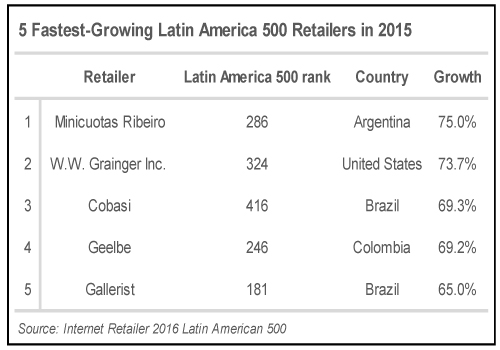