United HealthCare Services Inc. recently made several enhancements to its mobile site, and the improvements are paying off on the AppDynamics/Mobile Strategies 360 Performance Index. The index ranks the site speed and general performance of 30 mobile sites by their Speed Scores.

The health insurance company’s mobile site, UHc.com, moved up three spots on the 3G index to No. 20 from No. 23 for the week ending March 20. United HealthCare trimmed 300 kilobytes off of its mobile site home page weight, which lowered the visually complete time, or the time it took the web browser to finish drawing the visual elements on the home page, by 1.4 seconds, says Peter Kacandes, senior product marketing manager, mobile, web and synthetics, for AppDynamics. The decreased page weight also shaved 1.1 seconds off of the time it took for the browser to start drawing the visual elements on the home page, Kacandes adds.

“We have intentionally increased our focus on creating a ‘mobile-first’ experience for consumers, helping to make United HealthCare more accessible to people when and where they want to be reached,” says a United HealthCare spokesman.

United HealthCare uses a form of responsive web design that uses adaptive techniques to make pages load more quickly. This technique, like responsive design, uses one code base that automatically tailors the look of a website to the device the consumer is using—but does so in a way that minimizes the performance impact. Instead of sending the entire website code to a smartphone and letting the smartphone decide what to display to a consumer, as in pure responsive design, United HealthCare’s servers detect the device the consumer is using, and, if it’s a smartphone, only sends the smartphone-optimized website code. For example, United HealthCare only sends small images to mobile devices to display, instead of sending all the images, both small and large, and the browser selects which image to display, the spokesman says.

“We know our members and all consumers are increasingly using mobile devices to manage their health and wellbeing, so we have invested in resources to make that more convenient and efficient,” the spokesman says. He cites United HealthCare’s Health4Me app—which lets patients access a digital ID card, schedule telemedicine visits with healthcare providers, and contact a nurse anytime—as another example of United HealthCare investing in mobile. The Health4Me app has amassed more than 2 million downloads since its launch in 2012, he says.

Also on the 3G index, American Airlines Inc. fell four positions to No. 23 from No. 19, after it added a full second to its visually complete time, Kacandes says. This comes after American Airlines fell five positions on the index the previous week, and the week before that when it fell to 11 spots to No. 14 from No. 3. An American Airlines spokeswoman  attributes the slower performance to additional security measures on its mobile site that it added at the beginning of the month.

“We recognize these are impacting its performance for some users and we’re working hard to optimize our site to these new measures,” she says. 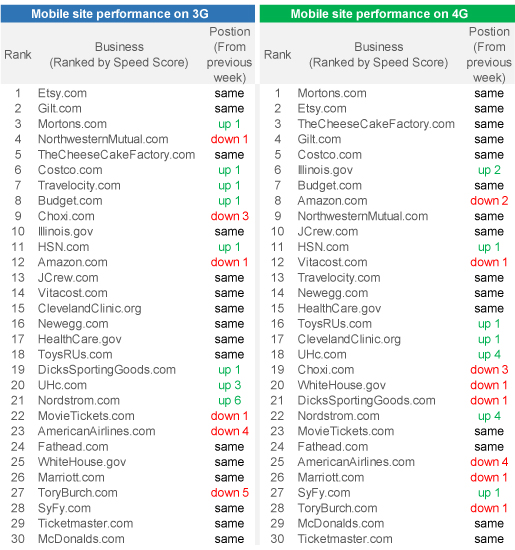 The index is accompanied by a chart on MobileStrategies360.com that is refreshed weekly to illustrate how each mobile site performs as well as index averages. Click here to access the performance chart for the week ending March 20.