The online grocery ordering and delivery service will operate pickup stations at three suburban Metro stops outside the District of Columbia.

Online grocer Peapod is launching pickup sites outside train stations to save Washington, D.C.-area commuters time on their way home.

The three sites operate from 4-7 p.m. Mondays, Wednesdays and Fridays. The stations are Glenmont, the last stop on a line in Maryland; Vienna, the last stop of a line in Virginia, and Fort Totten in northeastern Washington, which acts as a transfer point between two other lines. The Washington Metropolitan Area Transit Authority suggested the locations, a Peapod spokeswoman says.

Consumers pay a $2.95 pickup fee, the same as when they pick up their orders at 53 other mostly suburban sites that stand alone or are next to Peapod-affiliated Giant supermarkets throughout the D.C. area.

“When customers are going home from their commute between 4-7 p.m., this offers them the ability to check off one item on their to-do list,” the spokeswoman says. And with at least 50% of Peapod customers placing orders on mobile devices, public transportation pickup sites make sense, she says.

“As part of their daily commute, customers can simply exit a Metro station and grab their groceries on the way home,” says Gordon Reid, division president at Giant Food in Landover, Md. 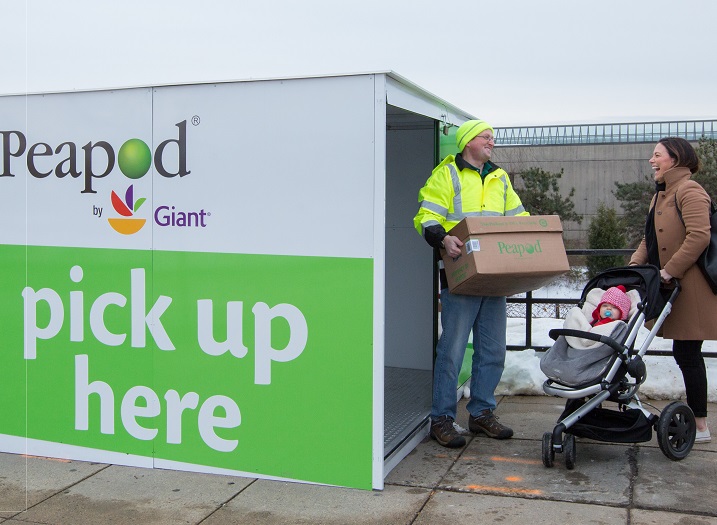 Customers place orders either online or with Peapod’s mobile app, then select one of the Peapod Metro Pick-Up locations. Once at the Metro stop, customers confirm their name and order number with a Peapod attendant. The pickup sites have lockers where customers’ temperature-controlled containers are stored to prevent tampering, and Peapod attendants are the only ones with access to the lockers.

In 2012, Peapod promoted its mobile app by setting up 7-foot-tall virtual shelves, filled with images of groceries and everyday items like paper towels, at Chicago “L” and Philadelphia train stations. Transit riders could download Peapod’s mobile app on their Android devices and iPhones to point at an item, scan its bar code and order groceries for next-day delivery at their homes or offices. That trial ran for about four months and no longer exists.

The race to make grocery delivery quicker and easier is gaining intensity, as U.S. consumers spent as much as  $24 billion buying groceries online last year, or between 3% and 4% of their total spend. That percentage is less than half of e-commerce’s penetration of total retail spending, but it’s a big jump from three years ago when e-grocery accounted for less than 1% of grocery sales, according to Kantar Retail. E-grocery sales are forecast to increase 21.1% annually through 2018, according to BI Intelligence research, compared with 3.1% growth for supermarkets.