Online price wars: how Jet.com’s prices stack up against those of Amazon and Walmart.com

Jet.com launched this week, promising the lowest prices online. A Profitero analysis shows Jet delivered, but that the savings varied significantly by category.

On Tuesday, July 21, Jet.com officially launched, promising shoppers the “lowest prices on everything.” On the day of the launch, Profitero carried out analysis to determine whether the online shopping club really does live up to its hype. 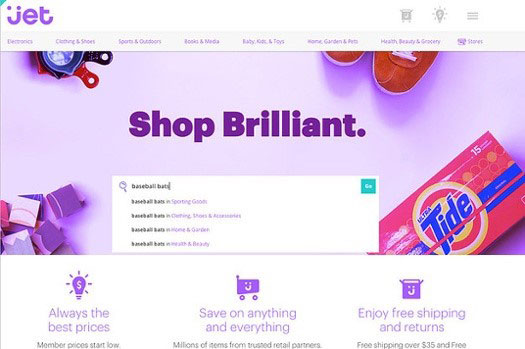 On exactly-matched products, Jet was priced an average of 9% lower than Amazon

In Profitero’s methodology, “exact matches” are products that are identical (same UPC, brand and pack configuration). It’s important to note that all pricing analyses do not consider extra discounts at Jet from combined orders, waived returns and preferred payment methods.

Our analysis reveals that Jet’s pricing was slightly closer to its competitors in higher-priced categories, although Jet was still, on average, cheaper. For example, Jet was priced six percent lower than Amazon on electronics products, compared to nine percent lower across the seven categories analyzed. 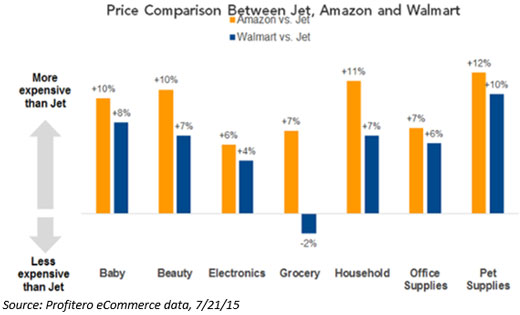 Notes: Products studied were in-stock and sold by all three retailers; Percentages do not sum to 100% since some products were priced the same between retailers

On average, Jet was priced lower than Amazon on Amazon best-selling products

We also analyzed Jet’s pricing on Amazon’s best-selling products — those Amazon products with a best-seller ranking of 20 or below in their respective categories — and found:

However, Jet is not cheapest across the board

While Jet.com was priced on average nine percent lower than Amazon and six percent lower than Walmart on exactly-matched products in the seven categories we analyzed, this certainly isn’t the case across all products. There was a percentage of products in every category, particularly electronics and office supplies, where Jet was more expensive.

Although there is no clear winner on price, it is clear that Jet is pricing aggressively at launch, especially on key household essentials such as Baby, Beauty, Pet Supplies and Household products. Price competition is at the center of Jet’s strategy, and the price comparisons Jet includes on its own product pages are likely to intensify competition.

Online retail pricing is increasingly dynamic and transparent and Profitero expects all three retailers’ pricing strategies, and the broader market, will continue to evolve. Profitero will continue to monitor and analyze the landscape — so look out for further updates. In the meantime, increased competition is ultimately good news for shoppers as they are set to benefit from lower prices.