New York & Co. turns the page on how it designs online campaigns

The apparel retailer wanted a more engaging, easy-to-shop web experience for consumers, so it tried a new platform on its website and boosted its views sixfold.

Not so long ago, Paul Carroll, vice president of digital & e-commerce creative at New York & Co., was daunted by the challenge of translating the apparel retailer’s shiny, colorful print catalogs and mailers into an engaging digital format.

The online version of the catalog was “just a page turner. We’d put a link on a page. The experience was one page at a time. We were not able to serve it up on mobile devices or smartphones. I’ll always remember when the CEO said, ‘What is that? It looks like a beta test,’” Carroll says.

He wanted a new way to present the clothing and engage shoppers; he wanted pop-up video, overlays, animated type and motion. He found it after using a pilot program in the fall and then witnessing a spring dress line sell out online in less than a week when it was presented and linked on New York & Co.’s website using Zmags Creator, a rich media platform that does not require complex coding. Drag-and-drop tools, asset libraries and widgets let designers create digital content without needing technical expertise, says Zmags, which likens Creator “to PowerPoint for digital content marketing.”

New York & Co., No. 238 in the Internet Retailer 2015 Top 500 Guide, used the new content marketing tool to promote an exclusive line of Sweet Pea by Stacy Frati dresses.  Sweet Pea clothing is made in the United States and sold by such brands as Anthropologie and Free People. New York & Co., which booked an Internet Retailer-estimated $105.5 million in web sales in 2014, made a small buy with four Sweet Pea dress styles. But generating a landing page with just four thumbnails using New York & Co.’s existing platform, which uses Adobe Scene7 software, would have left a lot of blank space on the web page and not looked like a collection, Carroll said. So the Creator-designed page, which is clickable on the retailer’s home page and appears to the consumer as part of the site, showcased all the dress styles in their various colors and included “behind-the-scenes” photos of Frati. “Our user engagement numbers were off the charts” with 60,000 viewers in four days—10,000 was the norm—and inventory was gone in less than a week, he says.

The retailer is looking to redesign its homepage for desktop and mobile, and Carroll says he thinks he could do it using Zmags. All of New York & Co.’s Eva Mendes landing pages were designed using Creator. Using the old method, Carroll would have been able to show video in just one way, but now he has autoplay and pop-up overlay video, and he said he easily created 360 dress videos across those pages.

Under the existing content management system, refreshing a thumbnail image or otherwise updating a page could take up to 10 hours for indexing to run through the system and serve  new content on the site, Carroll said. Now, within an hour or two, new creative can be on the site as clickable, shoppable pages. “I may go up with a fashion story with three to four items and put some ‘coming soon’ notifications in the creative (copy). Then the merchandisers call and say they went live and have inventory. I can go into Zmags Creator, revise the imagery, put in links and push content to the site, and four minutes later it’s updated,” he says.

Other retailers that have used the platform include Neiman Marcus and handbags and accessories retailer Brahmin. “By using Zmags’ Creator solution, Brahmin has more than doubled its click-through rate and is driving more online revenue as a result. We are earning a 20:1 return on our investment,” Alison Katz, director of direct-to-consumer at Brahmin, said in a statement.

New York & Co.’s Sweet Pea example was an exciting moment for Carroll, but using the new tool to showcase a spring collection of 40 dress styles—“our customer loves dresses”—highlighted how effective it could be. Rather than show a page of thumbnail images, Carroll grouped dresses by style, such as fit and flair, maxi or silhouettes. The Zmags-designed dress pages went up on a Thursday and Monday’s sales report showed New York & Co. had sold 6,800 dresses in four days. 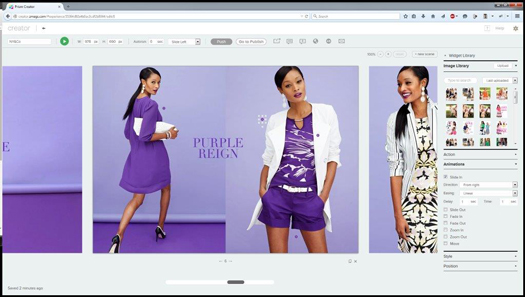 “This is about the ability to create unique shopping moments. If the shopper had been in the store, she would have been in there and maybe walked past some dresses. But each one on the site was clickable. It’s really improved what we’re serving up and how interactive it is. We’ll know quickly whether it’s working or not and whether she likes the fashion we’re showing her.”

The three-month trial with Zmags expired in February, and New York & Co. in March signed a one-year, $30,000 contract that includes all “experiences,” which is every piece of content pushed live, such as a catalog or a unique page. Zmags Creator pricing starts at $10,500 a year.

“I’m still learning the full capabilities,” Carroll says. “Before I had no way to know the consumer engagement, and with this I can see which lookbooks are being engaged with. I know page views and clicks,” he said.

“The return on investment has been beyond what I imagined. The more rich your content, the more loyalty you’ll have,” he said. “I got out of my winter of discontent.”