One big one: attracting sellers by eliminating listing fees.

Yixuan Luo, a graduate  student at ESSEC Business School, contributed to this article.

Alibaba’s success is no secret. From its humble beginnings in Jack Ma’s Hangzhou apartment, the company has evolved and grown into an e-commerce empire known internationally. What exactly is it about Alibaba that has enabled it to flourish? Here are seven fundamental reasons for its ground-breaking success. 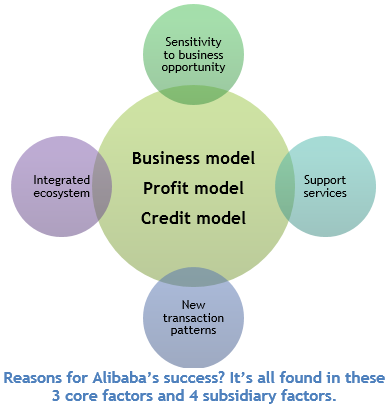 Alibaba was initially founded in Jack Ma’s apartment in Hangzhou in 1999, before Alibaba.com was launched later that same year. In 2003, as the number of Internet users in China reached 80 million, according to Alibaba’s prospectus, Taobao.com was launched as an online market. Shortly afterwards, both Alipay and Aliwangwang (instant messenger on Taobao) were launched to complete the purchasing process in Taobao.

In 2007, the number of Internet users in China rose to 210 million and Alimama was launched as an advertisement transaction platform. Taobao started to monetize that same year. Tmall was launched in 2008, as Alibaba ran both B2C and C2C platforms. In 2009, Alibaba Cloud computing was founded, illustrating Alibaba’s commitment to prioritize big data as part of its strategy. In 2010, the following three platforms were launched as part of Alibaba’s increasing focus on mobile payment: Juhuasuan (a platform for C2B); AliExpress (a global consumer marketplace); and Mobile Taobao App.

Be it 1688 (a B2B e-commerce platform), Taobao, or YiDaTong (the largest Chinese professional import and export agent), all of Alibaba’s three core businesses focus on providing services to small enterprises, accumulatively creating value that would not have been possible individually. Together, they represent a complete e-commerce ecosystem.

By focusing on small enterprises, a large variety of goods is made available to a large variety of target consumer groups. In 2014, the Alibaba platform handled a total transaction volume worth CNY 2.3 billion (EUR 330 billion, $340 million).

Alibaba charges for services in marketing and technical support, instead of for admission. This contributes to a large and robust market share made up of loyal customers.

Alibaba’s profits mainly come from advertisements and keyword bidding, which represents 57% of total profits. The second most important source of profits (representing 25%) comes from technical services based on big data of consumer behaviors.

By removing intermediate fees and allowing sellers to register for free, Alibaba was able to cultivate the online transaction habit among Chinese customers. eBay China, on the other hand, charges a fee for its platform transactions. By gathering a large number of sellers, Taobao succeeded in attracting even more customers.

Presently, the Alibaba platform represents more than 500 million registered users, including more than 230 million active buyers and more than 8 million active sellers, and annual orders have exceeded 11 billion, Alibaba says. Alibaba is able to leverage on the large number of customers on the platform, and also make use of advertisement, keyword bidding, and customer’s data for profit.

Alibaba’s accurate credit model helps to develop a trustworthy reputation among customers. All sellers on the e-commerce platform are requested to pass an online certification test to verify their identity information. This reduces illegal transactions as sellers are supervised on the platform at all times. Apart from that, all transactions are recorded and can be traced back by both sellers and customers.This protects the legitimacy of each transaction and helps customers choose more reliable sellers.

As an additional layer of protection, payments are first transferred to Alipay and only released to sellers when buyers indicate that they have received their products in good condition.In 2013, the number of users in Alipay approached 300 million, while the number of transactions reached CNY 900 billion (EUR 128 billion, $135 billion). Active users of the mobile terminal reached 100 million, which exceeded the number of users on PayPal.

In addition, the system is built such that online feedback is highly encouraged. Customers are rewarded for the reviews they contribute with discount coupons – more reviews, more discount coupons.These buyer reviews help other customers in their overall purchasing experience and decision making process, which reduces post-purchase regrets.

Alibaba’s service offerings provide a comfortable purchasing environment and positive online customer experience, leading to high user engagements.Alibaba offers a suite of support services to ensure optimal customer satisfaction by helping sellers to maintain positive interaction with buyers. Some of these support services include the offering of online business training for sellers, introduction of a special coding system to manage the large number of stores on the platform, development of its own instant communication tool for better seller-buyer communication exchange, and the reimbursement of any product with refunds completed within seven days. These support services help to generate more transactions.

Alibaba excels at identifying and seizing unique business opportunities, thereby positioning itself as a leader in developing customer loyalty. The ‘Double 11’ festival falls on November 11th, between Chinese National Day and Christmas. Most customers typically avoid shopping during that period but Taobao has successfully turned that day into an actual shopping festival.

In 2014, ‘Double 11’ generated over CNY 1bn in total trading volume for Tmall within the first three opening minutes. In a single day, Taobao generated a revenue of CNY 1.5 billion and a net profit of more than CNY 500 million (approximately EUR 71 million, $75 million), Alibaba has reported. During the event, Tmall sellers’ needs for advertisement and software services increased largely. Alibaba thus gains enormous profits from Double 11.

Alibaba actively challenges traditional transaction patterns and explores new ways to create more value for customers according to their needs.

Online-to-Offline (O2O) strategy: In Alibaba’s system, customers can purchase a product by scanning a two-dimensional code and they can also indicate receipt of a product with another code. Customers can also take part in various brand-run initiatives by scanning the corresponding codes to receive targeted advertisements. To accelerate the growth of the O2O service, Alibaba is actively employing the use of mobile terminal domains through “Alipay Wallet” and partnering with banks to provide code scanning and cash transfer services for payment.

Rather than position itself simply as an e-commerce company, Alibaba strives for excellent service quality by introducing easier ways of doing business for sellers, and by developing a positive purchasing experience for the buyers.

In order to achieve its goal in terms of positioning, Alibaba is expanding its core business to many different domains, such as advertising services, logistic network, financial services, and mobile terminal services.

Essentially an advertising platform on Alibaba’s B2B operations, users can list available advertisement positions on Alimama for advertisers to purchase.

Alibaba integrates comprehensive data resources that cover almost every aspect of customers’ daily lives through the acquisition of software companies in other domains (e.g. map, weather, taxi, music, and travel). The data helps advertisers to select the most appropriate website advertising channels and to reach customers effectively.

Made up of a group of people dedicated to assisting merchants in the promotion of their products, Taobao Ke follows the ‘cost per sale’ billing model—members receive a commission upon successfully identifying customers and convincing them to complete a purchase.

In April 2014, Taobao bought 16.5% shares of China’s largest video site, leveraging on the strength of videos on the desktop computer and mobile devices, to enable consumer interaction with advertisements. When consumers watch video advertisements, Taobao sends related information to their mobiles in various forms, including games and coupons to entice clicks from the audience.

Ali Micro Finance provides micro deposits and loans to small structures that typically experience difficulty in obtaining a loan from traditional banks. It translates the online customer behavior data collected from the Ali platform into businesses and categorizes small enterprises’ individual credit ratings according to their eligibility to apply for small loans from Ali Micro Finance.

CSN project was launched by Alibaba in collaboration with the four most influential logistics companies in China, with the goal of bringing products to buyers within 24 hours of the purchase. Logistic networks belonging to different logistic companies were integrated to form the single most effective network in terms of parcel turnover for customer delivery.

Based on data analysis, Alibaba selects the most suitable logistics company for different segments of the network. Customers can also choose from a list of delivery preferences (e.g. fastest, cheapest, safest or best service), and CSN will deploy the ‘right’ logistic company with the corresponding strengths accordingly

ESSEC Business School, based in Paris, established its Asia-Pacific campus in Singapore in 2005.