Selling to consumers outside a retailer’s home market can be complicated. Data in Internet Retailer’s recently released Global 1000 shows that merchants are more likely to tackle those obstacles if cross-border web selling presents a clear opportunity.

Online retail transactions that cross borders are on the rise.

In China, for example, increasingly affluent middle-class consumers are taking advantage of relaxed import rules to buy more from foreign brands and retailers via the web.

Chinese consumers and companies purchased 206.38 billion yuan ($31.96 billion) worth of overseas products online in 2015, up 60% from 2014, according to a report from Chinese research firm Analysys and web-only retailer JD.com.

The same is true in India, as free shipping and secure payment methods are driving more Indian consumers to shop from international e-retailers. A December 2015 report by PayPal Holdings Inc. and U.K. research firm Ipsos MORI revealed that India is one of the fastest-growing nations when it comes to cross-border e-commerce. India’s online cross-border spending will jump 78.0% in 2016 to 976 billion rupees ($14.61 billion) from an estimated 547 billion rupees ($8.21 billion) in 2015, the firms project.

However, cross-border e-commerce is complicated. Challenges include navigating customs fees, managing delivery in each market, and cultural and language differences.

According to data gathered for Internet Retailer’s recently released Global 1000, which ranks the 1,000 largest online retailers in the world and analyzes regional, global and market-specific e-commerce trends, retailers are more likely to tackle those obstacles if cross-border web selling presents a clear opportunity.

That’s the case in Canada, where the big U.S. market next door beckons, and where all 11 Global 1000 merchants based in Canada ship to the U.S. The common language, English, facilitates such sales, as do the relatively relaxed trade regulations between the U.S. and Canada.

Selling abroad is a lot less common in Japan, Brazil and Spain, however. And, despite the vast volume of goods being produced in Chinese factories, of the 192 Global 1000 retailers based in China, only 28% take orders and ship to online shoppers in foreign markets—the most common destinations being Taiwan, Hong Kong, the U.S. and Australia. 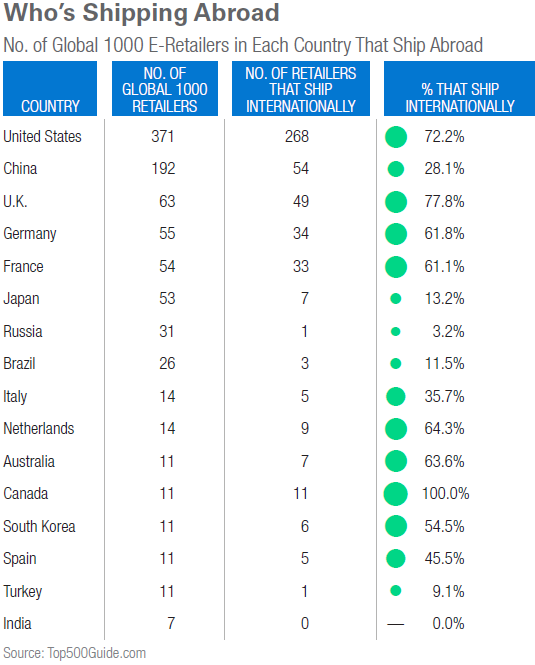