The Global 1000: The reinvention of global e‑retail

Consumers spent roughly $1.74 trillion online last year on retail purchases, more than double what they spent on the web just five years prior, according to Internet Retailer’s just-released Global 1000. But online retail is undergoing a real mind shift as merchants in markets around the world implement new online strategies to respond to new technologies and changing consumer behavior.

The biggest and fastest-growing web merchants around the world—or those ranked in Internet Retailer’s just-released Global 1000—are finding new ways to appeal to the demands of today’s online shopper, often going beyond the traditional desktop shopping site.

That’s the principal takeaway from the Global 1000: The Reinvention of Global E-Retail, Internet Retailer’s just-released research report and database.

In the just two short decades since the birth of online retail, quite a lot has changed. Roughly 40% of the world’s population—around 3.2 billion people—now have access to the internet, and nearly one-third own a smartphone.

Those connected consumers—and the online retailers that sell to them—are spurring big changes in retail markets around the world. Consumers collectively purchased $1.74 trillion worth of goods online last year, more than twice as much as they did five years earlier. Merchants in the Global 1000 alone sold $610 billion of that. In markets like the U.S., where Amazon.com Inc. dominates, and China, where Alibaba Group Holdings Ltd.is the main player, online sales now make up more than 10% of all consumer retail spending. 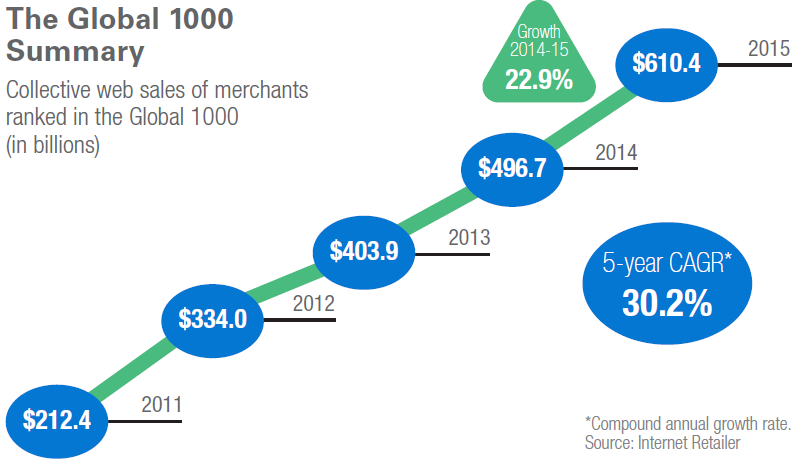 Each region is different and for a retailer to be successful beyond its home market, it must learn to appeal to consumers’ cultures and local needs. That includes providing popular payment options, addressing shoppers in their own languages, and offering convenient delivery options. Still, Internet Retailer research finds one common thread exists among all global e-commerce markets: Online retail strategy is changing at a rapid clip in order to keep up with changing consumer behavior.

Increasingly, four strategies show up among many of the biggest online merchants in the world, or those ranked in the Global 1000 include: selling on online marketplaces or operating one of their own, strong mobile technology, selling to consumers abroad and robust omnichannel capabilities.

The Global 1000 describes these strategies in detail. In addition to strategic analysis of winning e-retailing strategies, the in-depth 103-page PDF report and online database ranks e-retailers and online marketplace operators that comprise roughly 75% of the $1.74 trillion global e-commerce market. It also highlights unique characteristics of key regions and e-commerce markets, and identifies and largest and fastest-growing merchants in each region.

In the database version of the Global 1000, subscribers will also receive: