Mobile performance is not about fun and games, but if you’re a toy retailer it can a reason for celebration. That is, if you are doing well.

ToysRUs.com moved up five spots on the AppDynamics/Mobile Strategies 360 3G Index to No. 16 from No. 21 the previous week.

“The most significant mover was ToysRUs.com, which jumped up five positions mostly on the basis of an almost two second improvement in visually complete time,” says Peter Kacandes, senior product marketing manager, mobile, web and synthetics, for AppDynamics. Visually complete time measures how long it takes until the web browser has completed drawing the visual elements of a mobile home page.

ToysRUs.com’s visually complete time on 3G for the week ending April 24 was 20.6 seconds, an improvement from 22.5 seconds the previous week, but still four seconds above the index average of 16.6 seconds.

Also on the 3G index, Clevelandclinic.org fell three spots to No. 19 from No. 16 with a 0.4 second increase in start render time, or the time it takes for the web browser to start drawing the visual elements of the mobile site home page, Kacandes says.

For the week ending April 24, Cleveland Clinic’s mobile site start render time was 6.8 seconds, compared to 6.4 seconds the previous week. This is right around the 3G index average of 6.7 seconds. Cleveland Clinic did not respond to a request for comment.

Many of the mobile sites at the top of the 3G index held their positions or merely swapped places because of minor variations in their numbers, Kacandes says. For example, Etsy.com kept its No. 1 spot, as did No. 2 Gilt.com, but TheCheeseCakeFactory.com jumped a spot to No. 3, bumping Costco.com to No. 4. 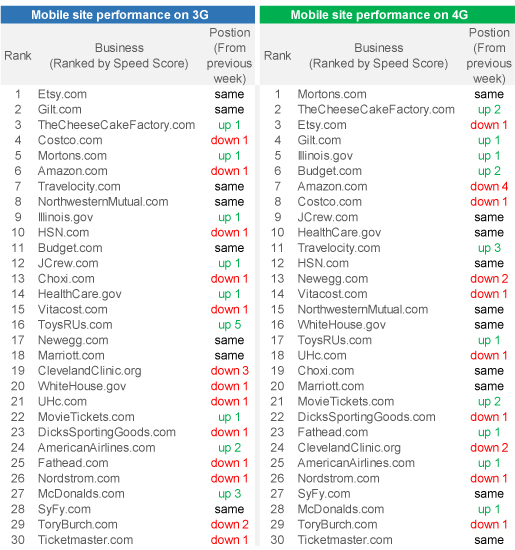 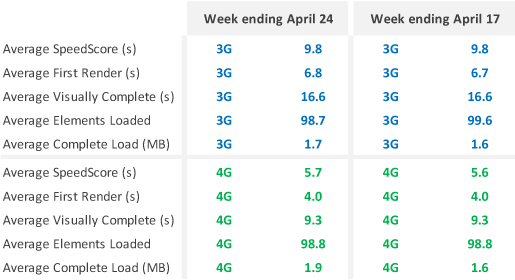 The index is accompanied by a chart on MobileStrategies360.com that is refreshed weekly to illustrate how each mobile site performs as well as index averages. Click here to access the performance chart for the week ending April 24.