A mild breeze shook up the mobile site rankings in the AppDynamics/Mobile Strategies 360 Index for the week ending April 17.

While some mobile sites stayed rooted in their positions—like No. 1 Esty.com and No. 2 Gilt.com on 3G—other sites slightly moved up or down the 3G index, such as Costco.com and TheCheeseCakeFactory.com, which swapped their No. 3 and No. 4 spots.

“This week’s results shows that while there was a lot of stability in 3G, there was also some movement, though mostly just a few spots up or down,” says Peter Kacandes, senior product marketing manager, mobile, web and synthetics, for AppDynamics.

Amazon.com’s mobile site again moved up in the rankings on 3G to No. 5 from No. 7 the previous week. Amazon reduced its mobile site home page weight by 360 kilobytes, which sliced two seconds off the visually complete time, or the time it takes for the browser to finish drawing the visual elements on the page, Kacandes says.

And despite Morton’s maintaining its mobile performance numbers, Amazon’s upward movement bumped Mortons.com down one spot to No. 6. Morton’s did not respond to a request for comment.

On 4G, Amazon jumped up five spots to No. 3 from No. 8 after decreasing the home page weight and decreasing its visually complete time to 9.0 seconds from 10.7 seconds. Mortons.com, however, maintained its No. 1 spot on 4G. Amazon didn’t respond to a request for comment.

Travelocity.com’s mobile site also maintained consistent mobile performance numbers week to week, but moved up two spots on the 3G index to No. 7 from No. 9. 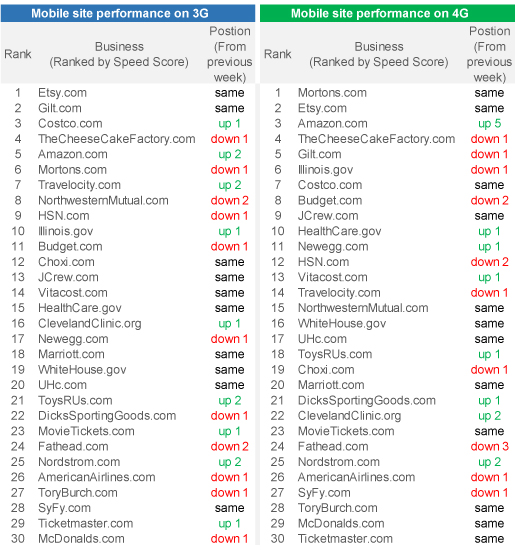 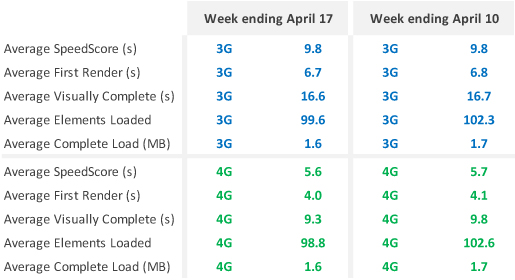 The index is accompanied by a chart on MobileStrategies360.com that is refreshed weekly to illustrate how each mobile site performs as well as index averages. Click here to access the performance chart for the week ending April 17.