And yet, five of the top nine companies on the 4G index shuffled around. Why would mobile sites in one network shuffle around but hold steady in a different network? Well, it’s complicated, Kacandes says.

First, the index is dependent on the relative positions of the other companies, Kacandes says. For example, on the 3G index, J.Crew Group Inc.’s mobile site home page performance ranking remained the same at No. 13 from week to week. On 4G, J. Crew rose four spots to No. 8 after its speed index improved by 0.5 seconds.

“In 3G, J. Crew also had an improvement in Speed Index (a 0.7 second decrease), but when compared to everybody else, they still wound up in the same spot,” Kacandes says. “In 4G, the change was enough to move them relative to the other companies.”

The Speed Index, which ultimately determines a mobile site’s ranking on the index of 30 companies’ mobile site performance, is a complicated metric, Kacandes says. It looks at the percent of content on a mobile home page that is displayed and how quickly, and compares those ratios over the course of the week.

“There is a very complex interaction between the size of different assets and how long it takes them to load over different network speeds. It’s not a purely linear scaling,” Kacandes says.

“The Speed Index is useful because it allows you to compare the perceived performance from the user perspective for different sites that may have very different page weights and page metrics, such as visually complete and start render,” he adds. Visually complete time is the time it takes a web browser to finish drawing the visual elements on the home page, and start render is the time it takes for the web browser to start drawing the elements on the home page.

Kacandes also notes that while the top nine spots on the 4G index weren’t exactly the same compared to the previous week, they were fairly consistent.

“Morton’s held the top spot, Gilt fell two spots, Etsy and Cheesecake moved up one spot,” he says. “Costco, Illinois, Budget were all in the same positions.”

In the middle of the pack, Nordstrom Inc. dropped four spots on 3G to No. 26 from No. 22 the previous week. A Nordstrom spokesman declined to comment.

Also, Fathead.com moved up three spots on 3G to No. 23 from No. 26 the previous week, despite a 500-kilobyte increase in the home page weight and a 4.8-second increase in the visually complete time. Start render time also decreased by 0.6 seconds, Kacandes says.

“We have compressed the image files used for our carousel on the home page, utilizing less complex images while retaining the quality,” Jones says. 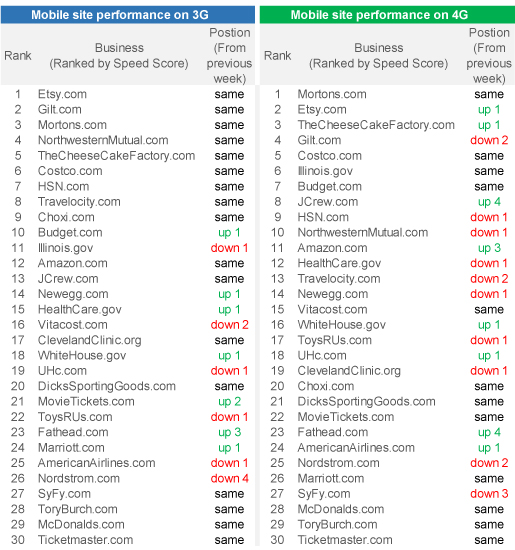 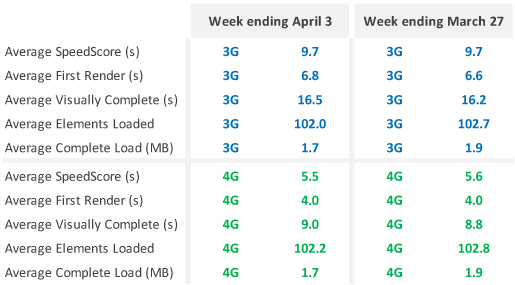 The index is accompanied by a chart on MobileStrategies360.com that is refreshed weekly to illustrate how each mobile site performs as well as index averages. Click here to access the performance chart for the week ending April 3.