A small percentage of a business’s app users generate the majority of the app’s sales and use, according to the new study, “State of Mobile Acquisition,” by digital advertising company RadiumOne Inc.

RadiumOne analyzed data from apps in January 2016 across more than 100,000 iPhones, iPads and Android mobile devices.

For retail apps, 18% of consumers who have downloaded the retailer’s app are high-value users, meaning they have made an in-app purchase in the last 30 days or have used the app at least 30 times in the last 30 days. And that 18% of shoppers generates 78% of the app’s revenue, according to the study. 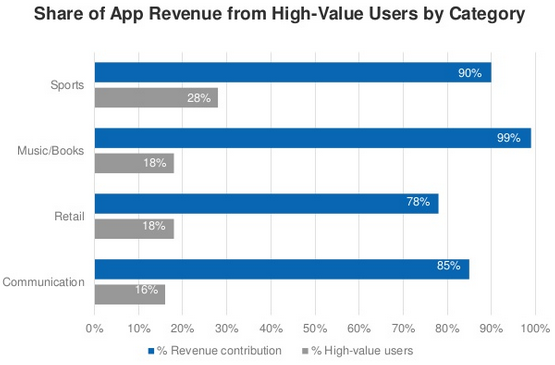 In fact, 28% of retail app users demonstrate mobile behavior that signals they could be high-value users, based on other apps on the consumer’s smartphone, websites the shopper visits and ads that shopper clicks on, according to the report. The report suggests targeting potential high-value users with in-app ads and mobile web ads.

Additionally, high-value retail app users are loyal to a small number retailers, according to the report.