Why a fast-loading site can look slow to a shopper

A big part of speed is perception.

If two sites take the same number of seconds for the web browser to finish drawing the home page (also known as visually complete time), but one site shows more content sooner, a consumer will perceive that site to be faster, says Peter Kacandes, senior product marketing manager, mobile, web and synthetics, for AppDynamics.

This perception matters in the AppDynamics/Mobile Strategies 360 Performance Index and factors into a mobile site’s Speed Score, Kacandes says. The index ranks the site speed and general performance of 30 mobile sites by their Speed Scores. To come up with a Speed Score, the index looks at each mobile home page’s visually complete time, start render (the amount of time it takes for the browser to start loading the page), page weight (how heavy a page is in megabytes), and resources loaded (the number of elements on a mobile home page).

This is the reason that J. Crew Group Inc.’s mobile site dropped five spots on the 3G index for the week ending March 13, Kacandes says. In fact, J. Crew reduced the number of elements on its home page by 100 kilobytes compared to a week earlier, the time it took for the web browser to start drawing the mobile home page stayed the same week to week and the visually complete time was actually faster by 0.6 seconds. However, J. Crew dropped to No. 13 from No. 7 on the 3G index.

“Sometimes you have to look beyond just the metrics and investigate further to understand how content is rendered and how that affects performance,” Kacandes says. “J. Crew’s speed score was slower by 1.3, indicating that more of the content is being rendered later in the cycle, reducing the overall perception of speed by the user.”

J. Crew is in the process of rolling out a new mobile site, and comparison metrics could be off, a J. Crew spokeswoman says.

Also on the index, American Airlines Inc., for the second week in a row, dropped on the 3G index. America Airlines slipped five spots to No. 19 from No. 15 the previous week. The mobile site’s page weight increased by 100 kilobytes, the visually complete time increased by more than two seconds and the time it took for the browser to start loading the home page increased 1.2 seconds.

The increase in the mobile site load time is because of enhanced security measures, an American Airlines spokeswoman says.

“We’ve enhanced security on our mobile site and, for some mobile users, it’s impacting performance,” she says. “We are hard at work to optimize our site to these new measures, but safety and security are the top priorities for our airline.” 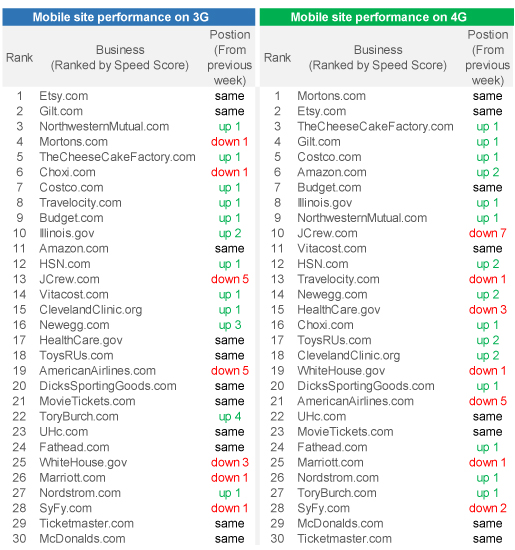 Visually complete average time was 8.8 seconds compared with 8.7 seconds the previous week. Average number of elements loaded was 99.1 versus 100.2 a week earlier. And average home page weight was 1.7 megabytes, the same as the previous week.

The index is accompanied by a chart on MobileStrategies360.com that is refreshed weekly to illustrate how each mobile site performs as well as index averages. Click here to access the performance chart for the week ending March 13.