Exclusive: Most popular Android retail apps in the U.S.

With more and more digital time being spent in apps the fight is on to get shoppers to not only download a brand’s app but also keep it on her smartphone screen and, perhaps most importantly, actually use it.

That rings true for retail apps especially, as 2015 data from comScore Inc. finds that 59% of digital shopping time occurs on mobile devices and that 54% of the time consumers spend with all digital media occurs within a mobile app.

A new exclusive index provided to Mobile Strategies 360 by digital analytics firm SimilarWeb will reveal the Top 10  apps each month in a range of verticals based on the app’s number of current installs and daily active users.

The first index covers retail apps on Android smartphones, and shows Amazon.com Inc. and eBay Inc. leading in popularity. EBay technically took first place in the index against second-place Amazon Shopping. Amazon Shopping is the newly rebranded app that is now the default for anyone wishing to install an Amazon app, says Pavel Tuchinsky, digital insights manager for SimilarWeb.

However, a closer look reveals one caveat.  Between Amazon’s old app, simply called Amazon, and the new Amazon Shopping, nearly 50% of Android smartphone owners in the U.S. have one of those versions of the Amazon app, making Amazon the undisputed first choice of app for U.S. shoppers, Tuchinsky says. 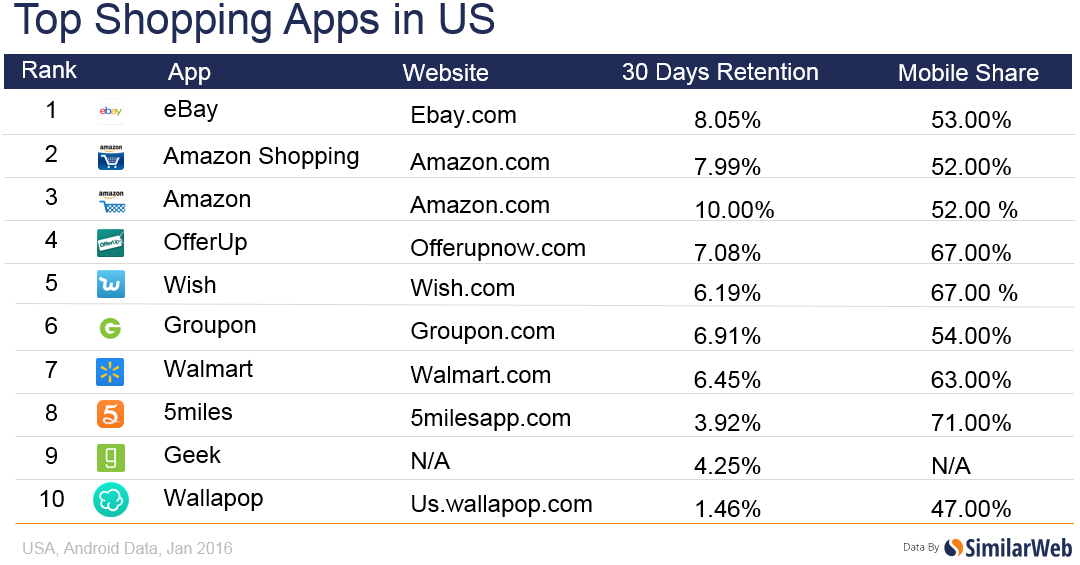 Looking at app retention is particularly noteworthy because it shows the level of long-term engagement and satisfaction with an app, SimilarWeb says. “Here we find Amazon and eBay also have the formula for retaining their users with up to 10% retention rates, which are market-leading performances within the retail app ecosystem,” Tuchinsky says.

However, he says rivals are gaining ground, including the strong performance of OfferUp with a 7% retention as of the end of January. OfferUp aims to help consumers sells goods locally by enabling them to take a photo of an item and circulate it to other local consumers with the OfferUp app.

Others ranking among the elite shopping apps list include 5miles and Wallapop, which also allow users to buy and sell products locally and see what people sell nearby or in a particular location. “This demonstrates the continuing and extraordinary scope for innovation and disruption in the app retail market,” Tuchinsky says.

One big retail app in the Top 10 list, however, has been trending downwards for the past few months. The Android app from Walmart Stores Inc. has fallen four positions in SimilarWeb’s retail app index since December. While it still ranks in the Top 10, new additions in its app, such as allowing online shoppers to check in once they get to a Walmart parking lot so online orders can quickly be assembled for pickup, haven’t been enough to help the retailer hold steady in the rankings. Still, Neil Ashe, president and CEO of Walmart’s global e-commerce, suggested mobile sales for the retailer are strong, noting on the company’s recent earnings call that purchases on mobile devices on Thanksgiving doubled from last year and accounted for more than half of online sales.

Another interesting data point is that most of the Top 10 brands in the index generate more web traffic to their mobile sites than to their desktop sites. Leading the pack is 5miles with a 71% of total traffic heading to its mobile site, OfferUp and Wish (tied as 67% for mobile site traffic) and Walmart (63%). “This suggests customers are comfortable with navigation and accessibility on mobile,” Tuchinsky says.

How to link your paid search ads to your mobile apps