Fathead relinquishes No. 1 spot to Etsy on mobile performance index

Sometimes a low ranking on the AppDynamics/Mobile Strategies 360 Performance Index doesn’t tell the whole story of a mobile site’s performance.

Fathead.com, an e-retailer of sports and entertainment decals, not only relinquished its No. 1 spot on the 3G index for the week ending Feb. 14, it plunged 24 spots to No. 25. The index monitors the site speed and general performance of 30 mobile sites.

While this appears to look bad from a ranking perspective, as Michael Layne, director of Internet marketing for Fathead admits, he says his customers are doing just fine. In fact, last week Fathead had the best week in 2016 in terms of overall year over year direct revenue, he says. Sales overall were up 19% year over year, and mobile sales were up 65% year over year.

Fathead’s home page weight grew a modest 300 kilobytes, to 3.1 megabytes compared to 2.8 megabytes the previous month. Plus the e-retailer added only three elements to its home page. However, its visually complete time, or the time it takes for the home page to finish drawing the visual elements on the page, increased six seconds, which is the main reason the e-retailer plummeted in the rankings, says Peter Kacandes, senior product marketing manager, mobile, web and synthetics, for AppDynamics.

Layne agrees with this data, as Fathead did add a slide to its home-page carousel. The second slide appears automatically, after a delay of 6 seconds, Layne says, which is the exact amount of time Fathead was penalized for its visually complete time.

“The customer experience is not affected by this delay,” Layne says. “What the consumer sees in the view port is happening as quickly as ever. We are simply providing additional visual elements and calls to action that expose more of our content and product offering at the top of the screen.”

Layne backs this up by saying Fathead’s mobile bounce rate, or the percent of visitors who leave the mobile site after viewing only one page, has not changed. If consumers were experiencing a longer delay for the mobile site to load, the bounce rate most likely would have shot up, he says.

“This is one of those cases where the numbers in the index don’t really tell the story from a consumer perspective,” Layne says.

“Etsy shaved almost 200 kilobytes off of their complete load, while maintaining an average of 62 elements loaded,” Kacandes says.

Etsy also improved its visually complete time by 0.7 seconds, to 7.5 seconds, and improved the time the home page starts drawing the visual elements by 0.5 seconds to 3.2 seconds. Etsy did not respond to a request for comment. 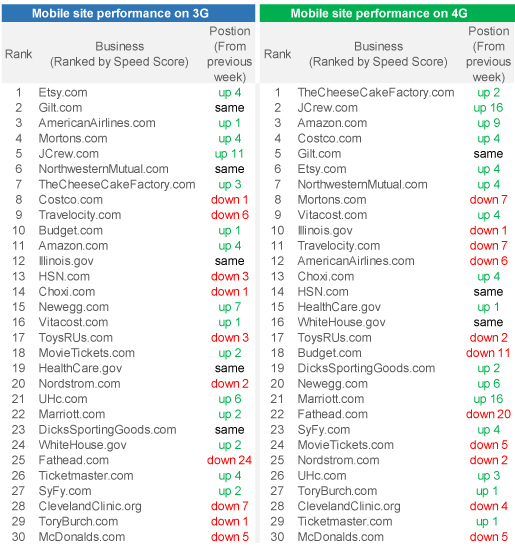 The index is accompanied by a chart on MobileStrategies360.com that is refreshed weekly to illustrate how each mobile site performs as well as index averages. Click here to access the performance chart for the week ending Feb. 14.