Where are those beacons everyone is buzzing about? This map will show you

Want to know where beacons are deployed in the U.S.? Mobile marketing firm Reveal Mobile can help.

Reveal Mobile has created a map—available to anyone who visits www.thebeaconmap.com—pinpointing the locations of more than 100,000 beacons across the country. Beacons are small pieces of hardware that can be placed anywhere and that use Bluetooth technology to send messages to nearby consumers’ smartphones. 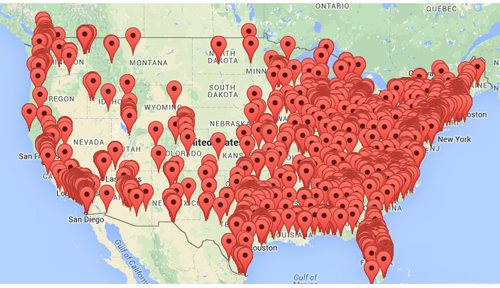 Besides publishing the map, which is continuously updated, Reveal Mobile is also using the beacon map to sell targeted audiences for advertisers, says Matthew Davis, vice president of marketing at Reveal Mobile.

Previously, Reveal Mobile was StepLeader Digital, which built apps for 200 national media and weather organizations. In those apps, StepLeader tested technology that became the basis for Reveal Mobile after StepLeader shut down.

Reveal Mobile obtains the information about the location of beacons through its software development kit, which runs in the background of 230 apps. The SDK running in the apps can detect both the latitude and longitude of a smartphone and Bluetooth beacon signals. Consumers need to have Bluetooth turned on and allow the app to detect her location for the tool to work. After several occurrences of a smartphone bumping into a beacon, Reveal Mobile then uses a series of algorithms to make an informed decision on the latitude and longitude of that beacon. From those coordinates, Reveal Mobile can then estimate where a beacon is located, such as at a Best Buy store or in Orlando International Airport. Brands can then zoom in on the map and click on a point to see exactly where the beacon is, such as CVS pharmacy on this street corner below:

Knowing which stores or venues consumers with smartphones visit based on the beacon map data from Reveal is valuable information for audience targeting, Davis says. For example, a tourism department may want to advertise to consumers who frequently travel, so it could target consumers that Reveal Mobile knows has passed by a beacon at an airport.

North Carolina news organization WRAL.com is one organization that is using Reveal Mobile’s beacon data. WRAL maintains four apps and has yet to generate significant revenue from the millions of app page views those apps accumulate each month, says Chris Weatherly, director of digital sales and products at WRAL. The WRAL news app gathers between 15 and 17 million page views a month, its weather app 2 million, its general sports app 300,000 and its high school sports app 300,000, Weatherly says. However, the revenue generated from these apps is less than 15% of the news organization’s overall revenue, and possibly far less since app ads are sometimes bundled together with desktop and mobile site ads, Weatherly says.

Generating mobile ad revenues is important to WRAL because for the past two months, more consumers have visited WRAL on a mobile device than on a desktop, Weatherly says.

“We’ve got figure out a way to follow the people,” Weatherly says.

WRAL is using the data from the beacon map to sell to advertisers targeting specific audiences, such as travelers going through the local airport. The news organization has used the beacon data for about seven months and has run four advertising campaigns, Weatherly says.

Reveal Mobile can help apps and in-app advertisers target specific audiences. For example, Reveal Mobile can identify the ZIP code for consumers that have an app with the Reveal Mobile SDK in it that also have location sharing turned on by identifying which ZIP code the smartphone is in most evenings and nights. After determining the ZIP code, Reveal Mobile uses United States Census Bureau data to then retrieve the average income and education levels and other metrics marketers want to target for that location, Davis says.

Reveal Mobile charges for targeted advertising campaigns based on the cost per thousand ad impressions, which can range between $1.00 and $2.50, Davis says.

Because of the limited number of consumers who have apps with the Reveal Mobile SDK in them and have location sharing turned on, the beacon map is not comprehensive and the audience it can reach is limited, Davis says. “Our biggest challenge is creating a scalable audience to target,” Weatherly says about using this data with advertisers.