Digital healthcare expands at the Mayo Clinic thanks to mobile

The Mayo Clinic has a simple prescription for ending the paper crush and slow communication plaguing the U.S. healthcare system: make it mobile.

Today about 60% of the traffic from all patients, providers, payers and others that connect to the Mayo Clinic and all of its various web programs, which includes dozens of mobile apps, is from desktop computers and 40% from web-enabled mobile devices.

But Mayo, which began working on a networked form of electronic medical records more than a decade ago, anticipates that within two years the majority of web traffic to MayoClinic.org and through its apps60%will stem from mobile. Patients want to take their healthcare with them and interact with the healthcare system where they are and when they need to, Ommen says. Increasingly they are doing more of that interaction on a mobile device.

Mayo began working on an institution-wide mobile health initiative in 2012 with the rollout of a secured app in compliance with guidelines for patient information privacy based on the Health Insurance Portability and Accountability Act of 1996, or HIPPA. The app enabled patients to access their medical records, schedule appointments and receive reminders, get lab results and access health information and management tips from a slew of online publications and clinical trials.

But with its patients, providers and others becoming more mobile-oriented, Mayo is taking a more mainstream approach to its mobile health initiatives and reorganizing key aspects of its Connected Care program, Ommen says. Throughout the year, Mayo has rolled out apps and other new mobile initiatives. In October Mayo began testing an iPad app that collects information to help patients with their specific diagnosis with breast cancer. In April the clinic introduced new mobile applications for the Apple Watch that help patients and providers manage schedules and visits.

Earlier, in January, Mayo introduced several steps to make digital interaction easier with the clinic through mobile devices, including enabling users to securely access apps from any iOS 8-enabled device, letting users see their appointment details from the lock screen of their iOS device with a simple swipe of the screen and giving Apple mobile device users anywhere, anytime access to their radiology images and reports within the Mayo Clinic app.

A version for Android devices was released in February. Future updates for Apple and Android devices and apps will feature more tools and data for disease and health condition management. We launched the Mayo Clinic app on Apple platforms first, but we had always planned to make this new functionality available on Android devices, too, Ommen says. An upgraded user experience, including new functionality such as the ability to view radiology images, gives Mayo Clinic app users access to actionable health information.

The number of monthly unique visitors to MayoClinic.org is at 21.9 million, says web measurement firm comScore Inc. Mayos main app has been downloaded more than 250,000 times from users in 124 countries, the clinic says. 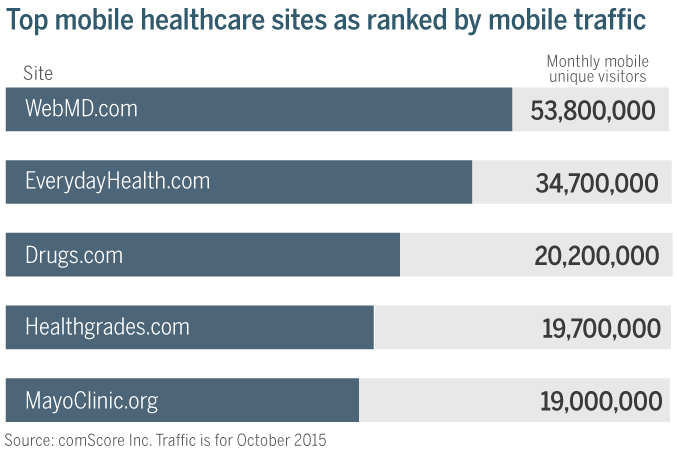 But the focus for the Connected Care program is to make mobile health more universally managed across the entire health system, which includes 3,800 physicians and scientists, and 50,900 other healthcare professionals and more than 70 hospitals and clinics nationwide.

Mayo in the summer formed a dedicated mobile unit inside its Connected Care program to focus solely on developing and launching new programs and updating existing ones. The mobile unit has about 12 full-time employees, a number Mayo expects to double next year, Ommen says. In particular the Connected health mobile unit is hiring business analysts at a minimum starting salary of $68,000 per year with five years of experience to examine the costs, benefits and risks associated with new proposed mobile projects. Mayo also is looking to hire a seasoned product manager at a minimum starting salary of about $77,500 per year with six years of experience to work on various strategic and new product initiatives.

Most mobile project planning and development is done on what Ommen calls a one off basis. But a big priority for the new mobile unit will be to take a more focused and enterprise approach to developing mobile health initiatives. We are putting an infrastructure in place, he says.

Mayo also is weighing in on mobile initiatives across the U.S. health system. In October, as part of its first annual Think Big competition to promote development of new digital healthcare initiatives, Mayo awarded $50,000 and a year of free consulting services to Wellpepper, a health care technology company that provides a secure platform for digital treatment plans between patients and medical staff delivered via mobile devices. We expect the use of mobile tools will grow to be become the largest share of interactions between health seekers and their care teams, Ommen says.