Online‑only Amazon opens its first store, and it sells books

Amazon.com Inc., the largest web web-only retailer in North America and Europe, opened the doors of its first store.

The rumors can be put to rest. Amazon.com Inc., the largest web-only retailer in North America and Europe, opened the doors of its first store Tuesday morning.

And it’s a bookstore.

The irony isn’t likely to be lost on many in retailing, given that Amazon was the key driver that propelled U.S. book sales online. Of the roughly $44.5 billion U.S. consumers spent on books, music and video products last year, 74% was spent online, according to Internet Retailer Top 500 figures.

Amazon Books sits on a prime corner lot in the University Village outdoor mall in Seattle, near the University of Washington campus and about 10 minutes by car from Amazon’s downtown headquarters. Retail neighbors at the upscale mall include Lululemon Athletica, Microsoft, Nike, Room & Board, Apple  and three Starbucks Coffees. Amazon Books is the only bookstore in the mall.

The store measures 7,400 square feet and carries 5,000-6,000 SKUs, an Amazon spokeswoman says, and data collected on Amazon.com plays a role in its merchandising. Amazon is No. 1 in the Internet Retailer 2015 Top 500 Guide.

That use of data was apparent in a store visit this morning by Seattle resident Mike Enright, who shared his impressions and photos at Internet Retailer’s request. (Full disclosure: He’s this reporter’s brother.) 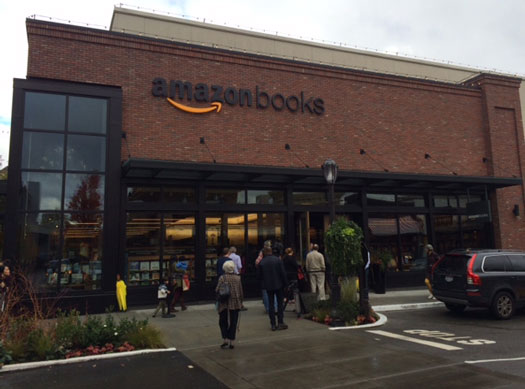 Signs in the new hardcover nonfiction section says the picks were selected using customer ratings, pre-orders, sales and popularity on Goodreads, “plus books we love.” Amazon has owned Goodreads, a book-focused social network where readers share their opinions, since 2013. A display behind the tablet-based cash-wrap station displays the top five books pre-ordered on Amazon.com that week.

The main aisle of the store displays Amazon’s consumer electronics, including the Kindle e-reader and tablets, the Amazon Echo and Amazon Fire TV. An end-cap display includes such electronics accessories as cables and headphones. 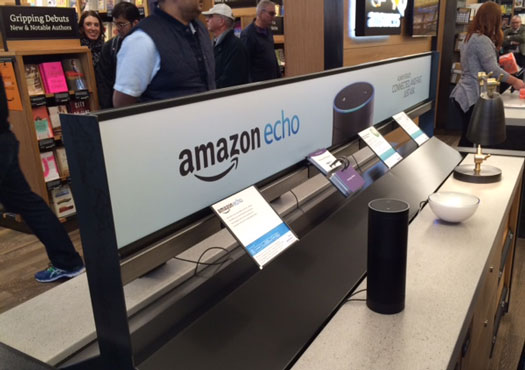 What’s not seen in the store is a price tag. A sign at the front door tells visitors the prices in the store are the same as on Amazon.com, and signs throughout the store instruct shoppers to use the scan function in the Amazon mobile app on their smartphones to learn the price. 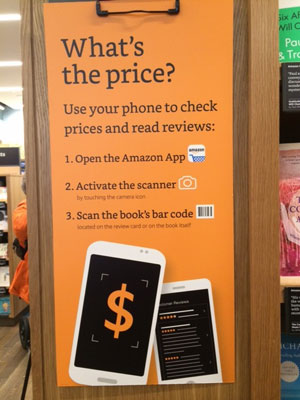 Each book—all are displayed with the cover facing out, no spines—has an index card-size placard. The cards display such information as a consumer review or what percentage of reviewers give the book a five-star rating. The card also includes the bar code consumers scan with their smartphone to learn the price and see more customer reviews. There also are scanners throughout the store for consumers who don’t care to use their phone or the app. 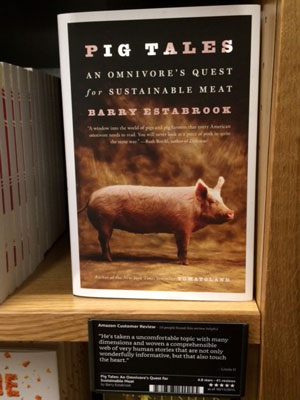 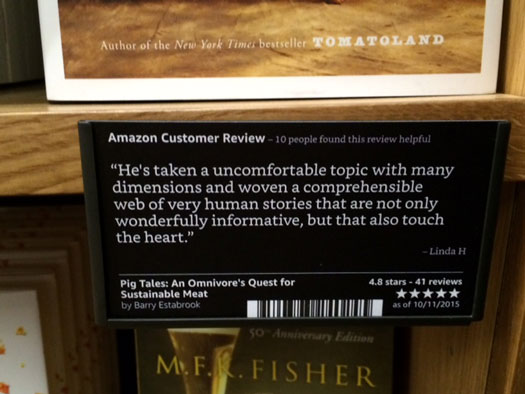 Clerks at an Amazon Answers counter near the center of the store act as concierges, answering shoppers’ questions and looking up titles and where they can be found in the store. If a title isn’t in the store, clerks take the title information and follow up or can direct shoppers to order through the Amazon.com app. Enright estimates 15-20 clerks were staffing the store Tuesday morning. He says the store wasn’t pushing the order online option with signs, and besides selling Kindle e-readers, he didn’t see a section or messaging about e-books.

At checkout, shoppers who are Amazon customers and who pay with the credit card associated with their Amazon account get their receipt emailed to them, and the purchase is recorded in their account history. If a customer doesn’t have an account or uses a different payment method, they get a typical transaction receipt. 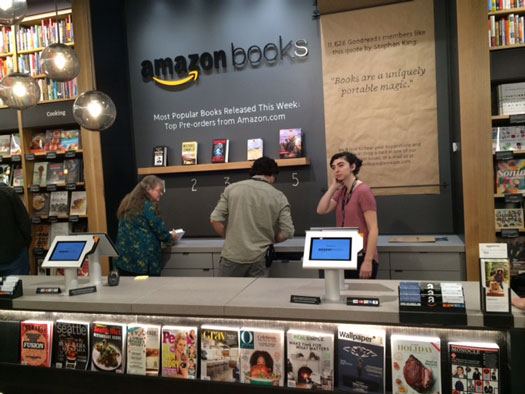 As part of the store’s grand opening, it sold Prime memberships to store shoppers for $89 —$10 off the usual annual fee.

Amazon’s bookstore surprised some industry insiders, but is in line with how Amazon tests new waters. “I have long opined that they would go more in the direction of Apple or Microsoft and use the store to help sell their technology first,” says Nikki Baird, managing partner at Retail Systems Research. “The fact that Amazon has chosen to make its foray into the physical realm with books first, I find it almost nostalgic.” But, she adds that when Amazon enters international markets, it usually starts by selling books.

“The biggest difference to me [with Amazon Books] is that they are starting with data-driven insights from online and building out from there, which means their learning curve for running a physical store might go a little faster than most retailers these days,” Baird says. Many store-rooted retailers put a lot of analysis into where to locate a store, but then struggle to get insights on which products to carry that customers in that area want, she says. 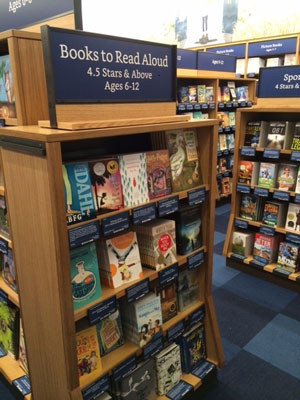 “They have very unique and nontraditional shelving and topical sections, and that’s what really stands out,” Enright says. For example, there’s a Star Wars area, a “gifts for new parents” section and “best-sellers in the Northwest.” In the kid’s section, which is decorated with murals and includes a play area, shoppers can browse among such displays as “Books to read aloud, 4.5 stars and above” for children age 6-12.