U.S. e‑retailers should look to Latin America for growth

U.S. e-retailers can take advantage of a major Latin American e-commerce growth opportunity if they plan ahead and execute well.

Latin America is not the easiest place for U.S. e-retailers to sell goods. Even in countries like Brazil, with its huge population, sprawling, modern cities and an emerging e-commerce market growing at a rate more than 20%, several factors make it difficult for online merchants from the United States and other outside countries to begin and maintain a steady e-commerce presence there. Throughout Latin America, poor road conditions, extremely high import taxes, fluctuation in currency exchange rates, the threat of economic recession and political unrest, and an abundance of bureaucratic red tape, have made many U.S. online retailers hesitate to fully commit to entering the region.

However, the 41 U.S. retailers ranked in the newly published 2015 Latin America 500, which ranks retailers by their web sales in the region, grew their combined sales over 18% to just over $2.41 billion in 2014, and that doesn’t count one of the region’s largest retailers, Walmart Latin America (No. 4), which is classified as a Brazilian merchant because it operates separately from its U.S. online business. 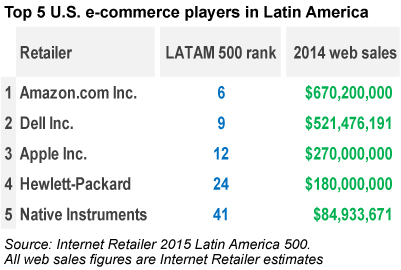 That growth rate should increase in the coming years as the number of Internet users and online shoppers in Latin America grows rapidly. Even with all of the aforementioned challenges to overcome, 192 retailers in the Internet Retailer U.S. Top 500 already ship orders to Brazil, more than ship to Mexico (190), and 166 ship to Argentina. That’s because the demand for U.S. brands is present in those countries and the rest of the region, says Pedro Guasti, vice president of institutional relations at Brazilian e-commerce research firm eBit.

“Especially in rural parts of Brazil, it is hard for shoppers to find desired American brands,” Guasti says. “The opportunity exists for retailers in certain categories, especially fashion and apparel, sporting goods and health and beauty.” Guasti cites tough competition from established retail chains in Brazil—like Lojas taQi and FastShop, as well as a few Chinese sites like AliExpress—and high import taxes—60% on orders more than $50 from other countries–and other regulations as reasons why U.S. computer and electronics merchants may have a harder time selling online in the region than, say, apparel retailers with cheaper, lighter-weight items that are in demand. That might help explain why Dell, No. 9 in the 2015 Latin America 500, had flat web sales in the region, growing only 0.5% to an Internet Retailer-estimated $521.5 million in 2014.

Brazil is not the only country with onerous customs regulations that affect heavier and pricier items. Argentina recently changed its customs policies to make it very difficult to ship packages with a power cord—including laptops worth more than $1,000 and cameras, cell phones and other electrical devices with a power supply greater than 50 volts—into the country, according to Federico Torres, CEO of Tradercom USA Inc., parent of Traetelo.com, a Florida-based marketplace, and Export.gov. Traetelo.com began selling U.S. brands like Timberland shoes and Fossil watches to Latin American consumers in 2006, and now has country-specific URLs for Argentina, Bolivia, Brazil, Colombia, Ecuador, Mexico, Paraguay, Uruguay and Venezuela. The latest additions are Chile and Peru, which the retailer launched this year. Torres says Traetelo.com’s online sales grew at least 50% in all Latin American countries except for Argentina and Venezuela, where sales grew slower due to economic downturns.

Torres echoes eBit’s opinion that there is a healthy demand in Latin America for more well-known U.S. brands. “Customers there are looking for more diversity and more options,” he says. “Brick and mortar stores cannot offer that variety. But inefficiencies in the region make e-commerce grow in weird ways.” Many retail chains either have not developed e-commerce sites or have them and don’t coordinate such basic features as buying online and picking up in store, say retail analysts.

The key for U.S. e-retailers attempting to enter new markets and take advantage of those inefficiencies, Torres says, is to target one Latin American country and aggressively localize their business in that market. According to Torres, localization means offering all of the preferred payment options—which often includes cash on delivery or bank order (about 60% of Traetelo.com’s Peruvian orders are paid in cash) due to the relative scarcity and lower monthly limits on credit cards in Latin America—as well as language optimization on websites and in call centers and, most importantly, shipping options. Although most customers are willing to wait longer for purchases to arrive (sometimes up to 40 days in rural areas) to get free shipping, Tradercom has recently partnered with global shipping carrier DHL in an effort to reduce the cost of express shipping by up to 40%. Tradercom has also opened a logistics facility in Miami and a small warehouse in Santiago, Chile, in an effort to provide faster shipping.

U.S. retailers can establish relationships with package carriers in Latin America, including FedEx, TTC in Colombia and private delivery services in large metropolitan areas. Once they address delivery and payments challenges, they stand to capitalize on a region where Internet and mobile phone usage are expected to skyrocket over the next five years. Currently, e-commerce only represents about 3.3% of the total retail market in Brazil, according to eBit, but that ratio could change as more consumers among the country’s 200 million inhabitants gain broadband access.

While Mexico and Argentina’s e-commerce landscapes are smaller and not as developed, Forrester projects healthy growth online in the region’s second and third-largest markets over the next half decade. Argentina, in the midst of an economic recession, declined 8% to $3.4 billion in online retail sales in 2014 but its number of online shoppers still managed to increase nearly 7% to 7.8 billion people. That total is projected to grow to 12.6 billion while sales are expected to grow more than 144% by 2019.

Total online shoppers in Mexico grew 14.8% to 10.1 billion in 2014 and Forrester predicts that number will more than double by 2019, growing to 21.1 billion shoppers. Over that span, online retail spending in the country is expected to increase about 140% by 2019 after web sales grew almost 22% last year.

In a move that will help reshape and augment the Mexican e-commerce arena, the world’s largest web retailer, Amazon.com Inc., in June 2015 announced the launch of full retail and marketplace offerings on Amazon.com.mx after selling only its Kindle e-books since the retailer’s Mexican website debuted in 2013. Amazon (No. 6) grew more than 41% to an Internet Retailer-estimated $670.2 million in Latin American web sales in 2014 without a full retail offering in Mexico or Brazil.

Amazon’s full entry into Mexico will be more easily facilitated because it already has a Spanish-language retail and marketplace offering in Spain, and it has collected ample data on Mexican consumers, says Scot Wingo, executive chairman and co-founder of e-commerce software provider and research firm ChannelAdvisor Corp. “Amazon has gotten smarter with their international launches,” Wingo says. “They know there is a large demand for a wide product selection, so they need a competitive offering out of the gate.” Amazon says its new Mexican e-commerce site will feature more product categories than any other international Amazon website featured at launch.

Mexico’s Spanish differs from Spain’s native language, but offers an easier transition than Brazil where Portuguese is the home language.

Wingo also says Amazon’s rollout in Mexico could serve as a sort of “training wheels” program for expansion into other markets in Spanish-speaking Latin America and eventually even Brazil. “Brazil is the ‘crown jewel’ of the LATAM region,” Wingo says. “At some point, I think Amazon will be there.”

While Amazon can learn from Mexico’s infrastructure and shipping concerns, an eventual move into Brazil will prove to be a bigger test for the company’s high customer service and delivery time standards. “Amazon is big on the ‘Prime promise,’” Wingo says. “Delivery times are very important to their customer experience. It could slow down any international rollout if shipping proves to be unreliable.”

While Wingo thinks U.S. retail chains might have a slight advantage and a pathway to a smoother transition in Latin America due to brand recognition and local employees with language experience and a feel for local customs and buying habits, he also says Amazon, with its enormous brand awareness worldwide and its mammoth marketplace product offering, stands to have unique leverage if and when it expands further into Latin America.