Amazon surpasses Apple and Hulu in the streaming video race

The retailer is still behind both Netflix and YouTube, though, according to data from streaming technology provider Qwilt. Amazon says its Prime members watched nearly three times as many videos in 2013 as in 2012.

Amazon.com Inc.’s Prime members are taking greater advantage of the additional perks beyond free, two-day shipping that come with their, recently more expensive $99-per-year memberships. Specifically, in 2013 they watched almost three times as many Amazon Instant Videos—which Prime members may stream to any web-connected device for free—than they did in 2012, Amazon says.

That’s helped the No. 1 e-retailer in the Top 500 Guide for the first time to surpass both Apple Inc. and Hulu LLC in the number of videos streamed, according to data from streaming technology provider Qwilt. As of March 2013, Netflix Inc. is still the No. 1 provider of streaming videos, according to Qwilt’s blog post on the findings. Second is Google Inc.’s YouTube, then Amazon, Hulu and Apple. In March of 2012, Netflix was first, then YouTube, Hulu, Apple and Amazon.

Amazon’s video traffic volumes increased by 94% year over year in March 2014, writes Mark Fisher, Qwilt’s vice president of marketing and business development in the blog. In some U.S. networks, Amazon in that time had a 300% increase in streaming video traffic. 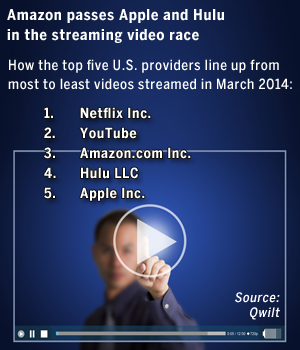 “Amazon wants us to stream more and faster,” Fisher writes. “Further, they want us to use their hardware, software, content and cloud services when we do it.”

Fisher predicts Amazon’s release last week of its Amazon Fire TV set-top box will make Amazon even more appealing to consumers as a source of streaming video. Fire TV connects to a TV set, as do similar devices from Apple and Roku, to enable a viewer to watch shows and movies from Amazon Instant Video and also from Netflix, Hulu Plus and other media networks. Fire TV has three main advantages over competitors, according to Fisher: The device has three times the performance of similar devices from Roku and Google Inc.’s Chromecast, Amazon has reduced the buffering delays before a video plays, and Fire TV offers voice-based searches. “All this means Amazon is serious about streaming video,” Fisher writes.